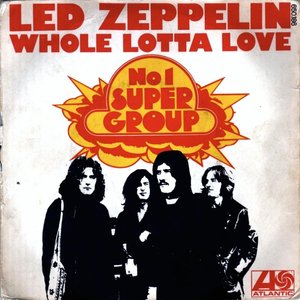 The opening track to Led Zeppelin’s second album, Led Zeppelin II, it was a rare single releaed in the United States and Japan, and there might not be a stronger, stompin’ song that kicked off a release.

And for an added bonus, here’s John Bonham’s drum track:

Jimmy Page has vehemently denied that the song originated onstage:

Interviewer: Is it true “Whole Lotta Love” was written onstage during a gig in America, when you were all jamming on a Garnett Mimms song?
Page: No. No. Absolutely incorrect. No, it was put together when we were rehearsing some music for the second album. I had a riff, everyone was at my house, and we kicked it from there. Never was it written during a gig–where did you hear that?
Interviewer: I read it in a book.
Page (sarcastically): Oh, good. I hope it was that Rough Guide. That’s the latest one, the most inaccurate. They’re all inaccurate, you know.