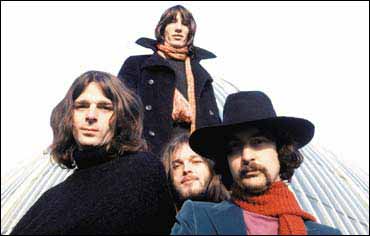 Great Gig in the Sky Piano

Us & Them Electric Guitar

Geezer cruisin’ for a bruisin’

I certainly was in the right

I was really drunk at the time

Not frightened of dying

There is no dark side

Why should I be frightened of dying

Yeah, I was in the right

Yes, absolutely in the right

Pink Floyd’s The Dark Side of the Moon was an immediate success, topping the Billboard Top LPs & Tapes chart for one week – astounding when you consider it subsequently remained in the charts every week from 1973 to 1988. Counting the time it spent there before and since, it totaled out at 741 weeks, beating the former record-holder, Johnny’s Greatest Hits, by Johnny Mathis, by several years.  Add in a later run on that chart and another 759 weeks on the Top Pop Catalog Albums chart, and Pink Floyd now has over 1,500 weeks on the charts. A pretty good feat since when it on March 17, 1973, it entered the chart at No. 95, the top debut that week.

With an estimated 50 million copies sold, it is Pink Floyd’s most commercially successful album and one of the best-selling albums worldwide. It still routinely moves 8,000-9,000 copies on a slow week. In fact, the album still often outpaces the low end of The Billboard 200, and every song on the more than 30-year-old record still gets radio play, with some among the most-played songs at classic rock stations monitored by Nielsen Broadcast Data Systems.

In addition to its commercial success, The Dark Side of the Moon is one of Pink Floyd’s most popular albums among fans and critics, and is frequently ranked as one of the greatest albums of all time. On March 22, 2013, the album was preserved by the Library of Congress into the National Recording Registry, calling it “culturally, historically, and aesthetically significant, and/or reflect life in the United States.”

The band members spent three minutes deciding on the front cover. “When Storm showed us all the ideas, with that one, there was no doubt,” guitarist David Gilmour told Rolling Stone in 2003. “It was, ‘That is it.’ It’s a brilliant cover. One can look at it after that first moment of brilliance and think, ‘Well, it’s a very commercial idea: It’s very stark and simple; it’ll look great in shop windows.’ It wasn’t a vague picture of four lads bouncing in the countryside. That fact wasn’t lost on us.”

At the very end of “Eclipse,” in the right channel, there is the faint sound of a Muzak version of the Beatles’ “Ticket to Ride.” And that’s actress Naomi Watts’ father making a cameo, as the “stoned laugher.”

And for all the success, the album won one whole Grammy Award. That went to Alan Parsons, for best-engineered recording.