Genesis’ The Lamb Lies Down on Broadway is a double concept album recorded and released in 1974, their sixth studio album and the last to include frontman Peter Gabriel.

Genesis considered reuniting for a brief reunion tour of The Lamb Lies Down On Broadway in 2004. All five former band members met in November to discuss a possible tour, but ultimately Peter Gabriel bowed out due to his solo commitments. In 2007, Tony Banks, Phil Collins, and Mike Rutherford went ahead with the Genesis reunion tour without Peter Gabriel and Steve Hackett, playing several Lamb songs during the show, the standard live numbers “In the Cage” and “Carpet Crawlers.” In March 2011, Collins announced his retirement from the music industry, ending any chances for future Genesis reunions. 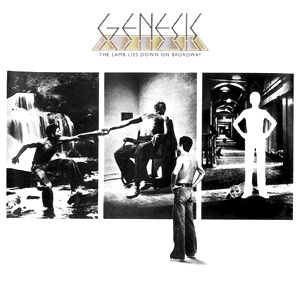 Writing in the NME in 1978, Nick Kent claimed the album “had a compelling appeal that often transcended the hoary weightiness of the mammoth concept that held the equally mammoth four sides of vinyl together.” In the Q & Mojo Classic Special Edition Pink Floyd & The Story of Prog Rock, the album came No.14 in its list of “40 Cosmic Rock Albums”. The album came 9th in Uncut’s “10 best concept albums”, where it was described as an “impressionistic, intense album” and “pure theatre (in a good way) and still Gabriel’s best work”.