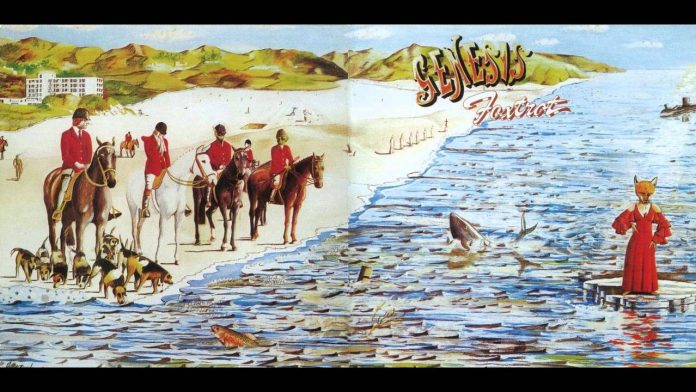 From the 1972 Genesis album Foxtrot, “Supper’s Ready” featured then vocalist Peter Gabriel. The album was the band’s first to reach the top 20 in the U.K. although it failed to chart in the U.S. Nearly 23 minutes in length, the song is divided into seven sections, and during the live performances, the song was preceded by Peter telling a story. This is the story told at the Rainbow Theatre on 20 October 1973 (as released on the Genesis Archive 1967–75 set), and throughout the tour, the main parts were constant.

“Old [Michael] went past the pet shop, which was never open, into the park, which was never closed, and the park was full of a very smooth, clean, green grass. So he took off all his clothes and began rubbing his flesh into the wet, clean, green grass. He accompanied himself with a little tune – it went like this.” Gabriel would briefly perform scat singing over Phil Collins’s drum accompaniment.

“Beneath the ground, the dirty brown writhing things called ‘worms’ interpreted the pitter-patter from above as rainfall. Rainfall in worm-world means two things: mating and bath time. Both of these experiences were thoroughly enjoyable to the worm colony. Within seconds, the entire surface of the park was a mass of dirty, brown, soggy, writhing forms.

“He was still pleased, old Michael, and he began whistling a tune this time to accompany himself.” Gabriel then briefly whistles the beginning of the hymn Jerusalem. ” ‘Jerusalem Boogie’ to us, perhaps. But to the birds it meant that supper was ready.”

in an interview, Peter Gabriel summed up “Supper’s Ready” as “a personal journey which ends up walking through scenes from Revelation in the Bible….I’ll leave it at that.”