“When things get too heavy just call me helium–the lightest known gas to man.” – Jimi Hendrix

A week before Jimi Hendrix passed away in 1970, he sat down with British journalist Keith Altham for what would be his last known interview. PBS’ animated web series Blank on Blank has gotten hold of the audio tapes and animated six minutes of their conversation, where Hendrix lightheartedly explains his views on politics, radicals, raging against the machine and more. 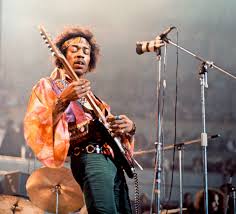 The best part, though, is when Hendrix is asked about his role in creating “psychedelic music.” He sluffs off the notion inititally, strikes a match and then responds with a rather direct statement. “The way I write things, the way I write is [a] clash between reality and fantasy, mostly,” he says. “You have to use fantasy to show different sides of reality … that’s how it can bend. I don’t really round it off too good. It’s almost naked, you know? I just hate to be in one corner – I hate to be just a guitar player, or a songwriter, or a tap dancer, you know?”

Hendrix on destroying guitars: Jimi Hendrix: “One time I said: maybe I should burn a guitar tonight. You know [laughs] smash a guitar or something like that. And they said: yeah, yeah! I said: you really think I should? They said: yeah, that’d be cool. I said: well, ok. So like I just worked up enough anger where I could do it, you know. But like I didn’t know it was anger until they told me that it was, like with destruction and all that. But I believe everybody should have like a room where they can get rid of all their releases, where they can do their releases at. So my room is a stage.” [laughs]