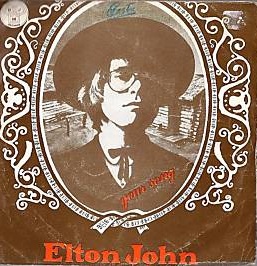 Writer Bernie Taupin offers a straightforward love-song lyric at the beginning: “It’s a little bit funny this feeling inside / I’m not one of those who can easily hide / I don’t have much money but boy if I did / I’d buy a big house where we both could live / So excuse me forgetting but these things I do / You see I’ve forgotten if they’re green or they’re blue / Anyway the thing is what I really mean / Yours are the sweetest eyes I’ve ever seen / And you can tell everybody this is your song / It may be quite simple but now that it’s done / I hope you don’t mind, I hope you don’t mind / That I wrote down in words / How wonderful life is / While you’re in the world…”