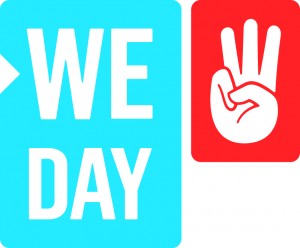 – First-ever We Day California will bring together 16,000 students and teachers on March 26 –

San Francisco, CA (February 12, 2014) – Today, international charity and educational partner Free The Children announced that its stadium-sized youth empowerment event, We Day, is coming to California for the first time on March 26, 2014 at Oracle Arena with the support of Co-Title Sponsors Microsoft, Allstate and Unilever. Selena Gomez, Seth Rogen, Orlando Bloom and 11-year-old blogger Hannah Alper were among the first revealed as part of the star-studded lineup of speakers and performers who will take the stage at We Day California alongside 16,000 students from over 400 schools across the state.

The announcement was made at Philip & Sala Burton Academic High School in San Francisco in front of over 700 students who were joined by players from the Oakland Raiders and a surprise appearance by Glee star, Jacob Artist.

Organized by Free The Children, We Day is taking the philanthropic world by storm and going global with events in the United States, Canada and the UK. Over 180,000 youth this school year alone will come together to take part in an unprecedented educational initiative which inspires students to become active local and global citizens.

Spearheading its arrival in California are long-time Free The Children supporters and We Day California Co-Chairs, Natalie Portman, and Magic Johnson along with philanthropic thought leaders Jeff Skoll, Founder and Chairman of the Skoll Foundation, Participant Media and the Skoll Global Threats Fund and Daniel Lurie, CEO and Founder, Tipping Point Community. National businesses are also lending support to We Day including Co-Title Sponsors Microsoft, Allstate and Unilever, and professional sports teams including the Oakland Raiders, San Francisco Giants, the San Jose Sharks and the Oakland Athletics.

“I believe in the power of young people to change the world, but they need support and guidance to do so” said Natalie Portman, Academy Award-winning actress, Free The Children ambassador and Co-Chair of We Day California. “We Day helps to bring that passion to life, encouraging young people to take meaningful actions towards the issues they care about and giving them the tools to make it a reality. I’m so honored to help bring this truly impactful youth-led movement to the state of California.”

The first round of speakers and performers set to attend We Day California was announced today by co-founder of Free The Children, Craig Kielburger. To date, the lineup includes:

“We are so thrilled to bring We Day to California for the first time. Since 2007 alone, youth involved in the program have raised $37 million for over 1,000 local and global causes and logged more than 9.6 million volunteer hours,” said Craig Kielburger, co-founder of Free The Children. “The enthusiasm students across the state have already shown for making a difference here in California and globally is incredible and we can’t wait to see what new initiatives will be sparked.”

Also today, youth from Raisbeck Aviation High School in Seattle who attended the first ever U.S. We Day event last year are gathering to celebrate the continued movement in the U.S. and to share the actions they’ve taken to earn their tickets to this year’s We Day Seattle.

Students can’t buy a ticket to We Day; they earn it through service by making a commitment to take action on at least one local and one global initiative of their choices as part of the year-long educational program called We Act. The We Act program supports students and educators with free educational resources, student-led campaigns and support materials to help turn the inspiration from We Day into sustained activation. The program enhances a school’s existing service learning initiatives or sparks new ones.

World-renowned leaders and A-list entertainers have added their voice to the We Day movement, coming together to address pressing world issues and ignite students’ passion to be a part of the solution. Past of guests of We Day include Sir Richard Branson, Queen Noor, Kofi Annan, Martin Sheen, Demi Lovato, Imagine Dragons, Jennifer Hudson and cast members from Glee, among many others.

We Day is free of charge to the thousands of students and teachers in attendance, thanks to the extraordinary support of sponsors, led in California by Co-Title Sponsors Microsoft, Allstate and Unilever.

Microsoft sponsored last year’s We Day Seattle and announced today its continued commitment to supporting youth involved in social good initiatives through We Day and We Act. Microsoft will continue to help bring We Day to Seattle and now California for the next three years as part of its YouthSpark initiative.

“We’re inspired by today’s youth and proud to support We Day to help them enhance their lives and the livelihoods of others. Since the launch of our YouthSpark initiative in September 2012, Microsoft has created opportunities for 103 million young people around the world in partnership with youth-serving nonprofits, such as Free The Children.”

Allstate cares about encouraging young people to make a difference in their own lives and the lives of others. Allstate will be supporting We Day events across the U.S. starting with Seattle and California.

“We are so excited to be a part of the first We Day California, and the spirit and energy that it inspires in young people to make a difference,” said Vicky Dinges, Senior Vice President of Corporate Responsibility. “Allstate is passionate about being a force for good, and we are thrilled to join with the leaders of tomorrow to help make our country and world a better place.”

Unilever is joining We Day for the first time as a Co-Title sponsor. Its recently-launched Unilever Project Sunlight initiative aims to build momentum behind a growing community of people who believe it is possible to build a world where everyone lives well and lives sustainably, without compromising the needs of future generations.

“At Unilever, we believe that together, small actions add up to a big difference,” said Jonathan Atwood, Vice President of Sustainable Living and Corporate Communications at Unilever. “We also understand that in order to create a more sustainable world, we need to empower the next generation to take steps toward a brighter future. By partnering with Free The Children, we’re bringing Unilever Project Sunlight, an initiative that inspires people to live more sustainably, to thousands of inspirational youth who are making a difference to create a better world.”

Registration for the We Act program is still open for students and teachers across California at www.weday.com/california. Registration closes on February 14, 2014 at 5 p.m. PDT.

Stay connected with We Day and Free The Children. We Day has over 1 million followers on Twitter and is the one of the world’s largest charitable causes on Facebook with 3.7 million fans.