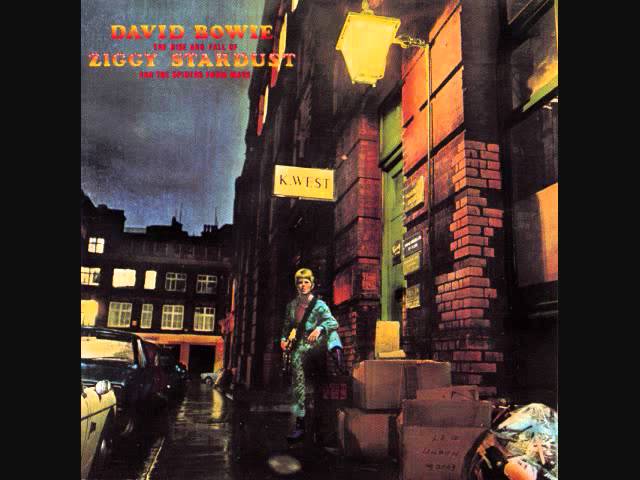 From the 1972 concept album The Rise and Fall of Ziggy Stardust and the Spiders from Mars by David Bowie, “Ziggy Stardust” is the seminal song loosely based on a story of a fictional rock star named Ziggy Stardust.

The character of Ziggy was inspired by British rock ‘n’ roll singer Vince Taylor whom David Bowie met after Taylor had had a breakdown and believed himself to be a cross between a god and an alien; though Taylor was only part of the blueprint for the character, other influences included the Legendary Stardust Cowboy and Kansai Yamamoto, who designed the costumes Bowie wore during the tour. The Ziggy Stardust name came partly from the Legendary Stardust Cowboy, and partly, as Bowie told Rolling Stone, because Ziggy was “one of the few Christian names I could find beginning with the letter ‘Z'”. He later explained in a 1990 interview for Q magazine that the Ziggy part came from a tailor’s shop called Ziggy’s that he passed on a train, and he liked it because it had “that Iggy [Pop] connotation but it was a tailor’s shop, and I thought, Well, this whole thing is gonna be about clothes, so it was my own little joke calling him Ziggy. So Ziggy Stardust was a real compilation of things.”