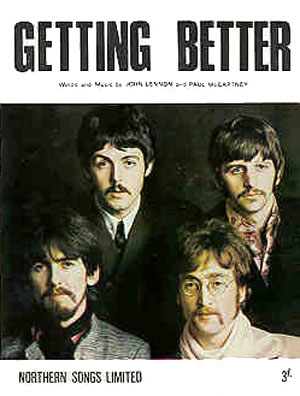 “Getting Better” appeared on the Beatles 1967 masterpiece album Sgt. Pepper’s Lonely Hearts Club Band. Written primarily by Paul McCartney but credited to Lennon-McCartney, the song’s title and music suggest optimism, but some of the song’s lyrics have a more negative tone. In this sense, it reflects the contrasting personas of the two songwriters. In response to McCartney’s line, “It’s getting better all the time”, Lennon replies, “Can’t get no worse!” Referring to the lyric “I used to be cruel to my woman/I beat her and kept her apart from the things that she loved/Man I was mean but I’m changing my scene/And I’m doing the best that I can”, Lennon admitted that he had done things in relationships in the past that he was not proud of.

According to Hunter Davies, the initial idea for the song’s title came from a phrase often spoken by Jimmie Nicol, the group’s stand-in drummer for the Australian leg of a 1964 tour.