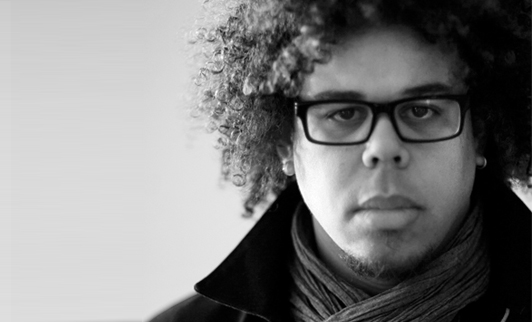 There’s the hair, then there are the glasses, but ultimately there is a person who is a magnet for positive energy, emotion, and creating stories. While he feels a deep connection to his past – Jake Clemons continues to make a deep connection in the present by living life to it’s fullest through a musical journey. If you take the mysterious, rugged side of Johnny Cash and mix it with the soulful down to earth love child of Bruce Springsteen and Clarence Clemons – shaken not stirred of course – you end up with the unique and talented Jake Clemons. He plays the guitar, sax, piano, and drums, he writes music, he sings, he loves rock ‘n roll.

If you’re still wondering who Jake Clemons is then consider that he has shared the stage with Bruce Springsteen and the E Street Band, The Swell Season, The Roots, and Eddie Vedder to name a few. This is the beginning of a man who is leaving a legacy of storytelling, starting with his first EP, Embracing Light.

Eric: Your first EP, Embracing Light, what took you so long, are you moonlighting with another band or something?
Jake: You know, I have been doing some moonlighting. [laughs]
Eric: Are the bands you’re playing with big? Have we heard of them before? [laughs]
Jake: [laughs] I’ve played with a lot of different people through the years.

Eric: How long have you had the songs that are now out? Are they kept in your mind until you get them out in the studio? I’d imagine finding time playing away from the E Street Band is sometimes tough.
Jake: Yeah. Absolutely. I wrote a lot of songs for a record that I was going to hopefully release in 2012. You know, due to the changes that have taken place, I kind of revisited that process. I learned a lot along the way. Being on tour with E Street and stuff so I kind of scrapped my original idea and started writing some new songs for a different concept, you know. Something that was going to be more thematic. And it ended up, became the EP that is now Embracing Light. We actually recorded 15 songs originally. And given the time constraints, as crazy and hectic as it is to try and write on the road and record when you’re on tour, it kind of streamed it down to five songs that told the whole story and came at it from different angles.

Eric: Are you going to put out the other ten in other EPs? Are you going to forgo the concept of the album and just keep releasing music?
Jake: I gotta tell you, man. That’s like such a hard thing. It’s such a heartbreaker for me first of all to not have an old school album.
Eric: The album still means something to people. At least it does to me.
Jake: Yeah. I love it. And it’s such a battle now because it’s so easy to put music out and the accessibility has to be there constantly. It’s one of those things. You spend a little less time on it. I feel like it loses a little something, you know.

The recent Living Room shows in Europe were such a phenomenal experience! I'm hoping we can share that same connection with friends all over the world! Stay tuned for details on what regions we'll be visiting next! #InYourLivingRoom

Eric: The EPs, though, forces people to put their greatness out there. There is no time for “good” anymore.
Jake: Absolutely. Absolutely. And that’s kind of what it came down to. I’ve heard so many stories about that, you know, through the years. And being on that tour, I was literally taking my guitar and my keyboard and my laptop and my saxophone to every hotel room that we traveled in around the world. And setting up a little studio and recording demos and then e-mailing them to my producer. And we’d go back and forth internationally. We were able to basically package the five songs we felt told the story the best and we’ll see. There is a bigger story there. And I am hoping to be able to share the rest of it, the rest of those colors, that are on the original concept Embracing Light.

Eric: Along with the E Street band you’ve also played with Eddie Vedder, The Roots, Glen Hansard. I saw you at SXSW a few years ago when you were playing with Glen. What struck me about you was the way you hung out with the fans and the musicians. You could tell that you love music.
Jake: Absolutely. It’s just one of those things. It’s in my blood, it’s the foundations of my atomic structure, I guess. I didn’t even realize that music could be a career. It felt like a language. It just felt like speaking. I grew up in a musical family and it’s just part of who we are.

Eric: What does playing or hanging around with someone like Glen Hansard teach you?
Jake: I met him after I saw Once. And that movie changed my life in so many ways. I was never really a singer. I was somebody who loved music and I played whatever I could get my hands on. But I was really afraid of singing for a long time. And I saw that film and just the rawness of it, the unabashed glory, the way Glen Hansard opens himself up and expresses himself. You get this notion like “This is who I am.” Baring it all. And that immediately, from that sense of how he performs taught me so much and inspired me to sing. And then through the years, his storytelling, and the way he interacts with an audience. It’s very similar to Bruce actually. But from a more folksy perspective.

Eric: I’ve always felt that music is a calling for those who end up as musicians. You’ve always had a sense of purpose. You have to apply not just talent, but discipline to go out on the road for 300 shows with Springsteen to figure it out.
Jake: I went to school for music and I learned the effectiveness of practicing. It’s also that something i’ve been so passionate about, especially from a stage perspective. I love being able to connect with an audience and be a conduit in a sense. There’s a lot of discipline that happens in that side of things. I’m always taking notes. Whenever I see something great happening, or another performer that’s inspiring me, I’m taking notes as to what is that magic moment? What is that clutch? I want to share that. I want to participate and be able to put that in my own scenario. Even the sense of being on the road all the time, that’s the thing that’s gotta be in you. I can’t sit down for too long [laughs].

Eric: I’d imagine there’s not a lot of opportunity to do that. I’d imagine that even with all your experience and practice, it must have been a little nerve wracking in the beginning playing with Bruce and the band. They’re so good, they know a gazillion different songs. Are you at that comfort level? Did that come quick?
Jake: The thing with Bruce’s music and the role I was asked to fill was, man, Clarence’s notes are like scripture. You can’t mess with it. It was more of a sense of wanting to understand the depth of each of those notes and what they were saying. There’s plenty of songs where there’s a saxophone solo that Clarence played that in some ways transcends the lyrics, it speaks to people beyond what they song is about itself. I really started to understand after 9 hours a day of practicing these songs. Invaluable lessons. The depth of what a note can mean, just really blew me away. I’m so grateful that those exist. That someone like my beloved uncle was able to teach those lessons even from this distance now.