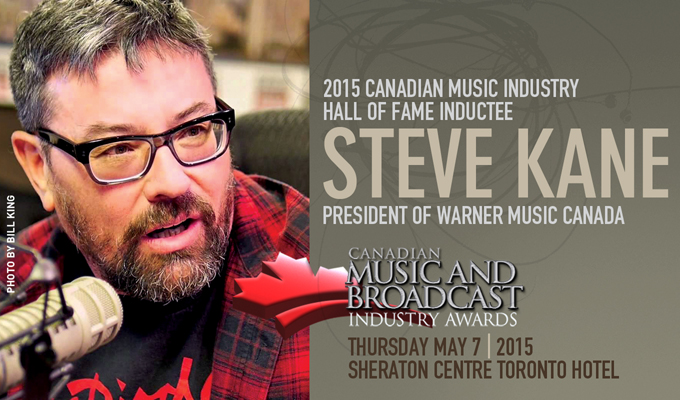 Canadian Music Week is pleased to announce Steve Kane as a 2015 inductee to the Canadian Music Industry Hall of Fame. Kane, the President of Warner Music Canada, will be honoured for his achievements at the Canadian Music & Broadcast Industry Awards gala, taking place on Thursday, May 7, 2015 at the Sheraton Centre Toronto Hotel.

In a career spanning more than 25 years, Steve Kane has been a prominent figure in the music industry as both a business leader and avid supporter of Canadian music and artists. He has been outspoken on behalf of creators’ rights, addressing government and industry on issues affecting the creative community and music business overall.

“I am beyond humbled that the selection committee thinks that I should share this honour with so many people I consider my teachers and role models,” said Kane. “I can’t believe that a fan’s love of music would lead to a career in which I’ve had the privilege to assist artists in taking their music to the world and that has been reward enough …well, that and all the free records.”

“Steve Kane has been one of the music industry’s unsung heroes for decades,” said Canadian Music Week President Neill Dixon. “His hands-on approach to management and artist development is remarkable while his work behind the scenes – whether on a committee, board or association – imparting his passion for music to everyone he meets, is exceptionally admirable.”

At the helm of Warner Music Canada for more than a decade, Kane has effectively revamped the label’s Marketing and A&R operations and brought the company into a new phase of growth. He has instilled a dedication to artist development while still retaining the organization’s commitment to its heritage artists, including such Canadian greats as Barenaked Ladies, k.d. lang and Michael Buble. Under Kane’s direction, the company signed Billy Talent, who has since become one of Canada’s biggest rock acts winning multiple Junos, MuchMusic awards and enjoying top of the chart success both in Europe and in Canada. Kane was also instrumental in signing the internationally acclaimed Buck 65 and Ron Sexsmith, rising country star Brett Kissel, current Top 40 radio sensation Victoria Duffield, Courage My Love and emerging artists Scott Helman and Kai. Most recently, he worked closely with Canadian music legends Blue Rodeo to extend the band’s recording agreement and relationship with Warner Music Canada for many years to come.

Kane joined Warner Music Canada after more than fifteen years in the Canadian music industry where he was the Senior Vice President of Universal/Island/DefJam Canada from 1998 – 2001 and Senior Vice President of Polygram Records in Canada in 1997. Throughout his career, he has also held positions in marketing and promotions at independent label I.R.S. and A&M Records, before becoming General Manager of Virgin Records.