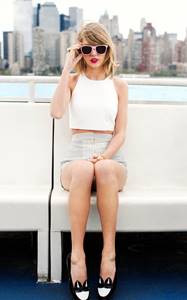 Seven-time GRAMMY winner TAYLOR SWIFT announced THE 1989 WORLD TOUR on Good Morning America this morning just days after performing an epic concert in Times Square to over 20,000 fans, wrapping up promotion of her history making fifth studio album, 1989 (Big Machine Records). THE 1989 WORLD TOUR will be produced and promoted by AEG Live & The Messina Group (TMG) and kicks off on May 20, 2015 in Louisiana.

Australian singer-songwriter Vance Joy will be main support along the North American tour while singer, songwriter and viral sensation Shawn Mendes will support the global superstar along her North American stadium dates. THE 1989 WORLD TOUR will encompass eight countries and span four continents including North America, Europe, Australia and Asia**. The first tickets for the North American leg will go on-sale to the general public on November 14. American Express® Card Members and members of TaylorSwift.com will have access to purchase tickets in advance beginning November 7*. General ticketing and on-sale information will be available at TaylorSwift.com.

Last year, the North American portion of Taylor’s sold out The RED Tour played to more than 1.36 million fans over 66 shows (including 13 stadium stops) in 47 cities in 29 states. Also in 2013, Taylor took The RED Tour Down Under – performing sold out stadium shows in Australia (as well as arena dates in New Zealand), becoming the first solo female artist in twenty years to undertake a national stadium concert tour of Australia. In addition, The RED Tour visited Europe for six sold-out shows in 2014.

Taylor Swift, who writes all of her own songs, is a global superstar, seven-time GRAMMY winner and the youngest winner in history of the music industry’s highest honor, the GRAMMY Award for Album of the Year. Taylor is the only artist in music history to have an album (2010’s Speak Now, 2012’s RED and 2014’s 1989) hit the 1 million plus first-week sales figure three times. She is the first artist since the Beatles (and the only female artist in history) to log six or more weeks at #1 in the U.S. with three consecutive studio albums. Taylor has an album on Rolling Stone’s prestigious THE 50 GREATEST ALBUMS OF ALL TIME (by women) list, Time magazine has named her one the of the 100 MOST INFLUENTIAL PEOPLE in the world, and she is Billboard’s youngest-ever WOMAN OF THE YEAR and the only artist to have been awarded this honor twice. Taylor has career record sales in excess of 30 million albums and almost 80 million song downloads worldwide, and has had singles top both the pop and country radio charts around the globe. Taylor’s album RED (Big Machine Records), released two years ago, sold more than 1.2 million copies in the U.S. in its first week, scoring the highest first-week sales debut of any album in over a decade. “Shake It Off.” the first single off her critically acclaimed fifth studio album 1989, topped Billboard’s Pop, HotAC and Hot 100 charts and has earned double PLATINUM-status by the RIAA for exceeding sales of two million downloads in the U.S., and has peaked at #1 1 in 64 countries on iTunes. 1989 topped iTunes’ sales charts in 95 countries on its release and was the highest selling first week release of 2014.

* American Express Presales vary by market so please check your local listings.
** Additional shows will be announced in Asia and Australia