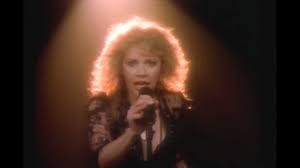 When you did “Stand Back” on the last tour, I counted 18 twirls during the guitar solo. Are you ever tempted to just stand there and take it easy onstage?
Well, I’m very practiced at twirling. I would be so bored if I was up there just standing. I took a lot of ballet — I always wanted to work the dancing in. The reason I wear the ponchos and the big shawl-y chiffon things is because I realized from a very young age, if you were 5 foot 1, and you wanted to make big moves and be seen from a long way away, if you weren’t twirling a baton of fire, you needed something that was gonna make you show up. Like a Las Vegas showgirl, really. You need big moves. If you’re gonna dance, you gotta really dance.

I do this long dance during “Gold Dust Woman” — we call it the Crackhead Dance. It’s me being some of the drug addicts I knew, and probably being myself too — just being that girl lost on the streets, freaked out with no idea how to find her way. Years ago Lindsay would have said, “You can not do the Crackhead Dance onstage. Lose that.” But now he likes it, because it gives him a chance to jam and play guitar. When Christine saw it, she said, “Wow, we’ve always known that ‘Gold Dust Woman’ was about the serious drug days, but this really depicts how frightening it was for all of us and what we were willing to do for it.’ We were dancing on the edge for years.