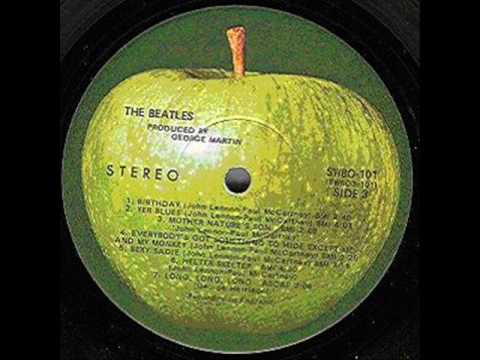 Given how downright weird, strange and brilliant The Beatles’ White Album is, I clearly remember being so freaked out by Revolution #9. Going from “She Loves You” to this in less than 7 years? Potent stuff for an 11-year-old at the time. The sound collage, credited to Lennon–McCartney, was created primarily by John Lennon with assistance from George Harrison and Yoko Ono. Lennon said he was trying to paint a picture of a revolution using sound.

The song began as an extended ending to the album version of “Revolution,” which Lennon then combined the unused coda with numerous overdubbed vocals, speech, sound effects, and short tape loops of speech and musical performances, some of which were reversed. These were further manipulated with echo, distortion, stereo panning, and fading.

Revolution 9 was an unconscious picture of what I actually think will happen when it happens; just like a drawing of a revolution. All the thing was made with loops. I had about 30 loops going, fed them onto one basic track. I was getting classical tapes, going upstairs and chopping them up, making it backwards and things like that, to get the sound effects. One thing was an engineer’s testing voice saying, “This is EMI test series number nine.” I just cut up whatever he said and I’d number nine it. Nine turned out to be my birthday and my lucky number and everything. I didn’t realise it: it was just so funny the voice saying, “number nine”; it was like a joke, bringing number nine into it all the time, that’s all it was.

The loop of “number nine” featured in the recording fuelled the fallacy of McCartney’s death after it was reported that it sounded like “turn me on, dead man” when played backwards. Thanks to YouTube, we can now hear, in a bit of a stretch of the imagination – maybe – what they were actually telling us. Gibberish, or hints of insider information on The Beatles? You be the judge.