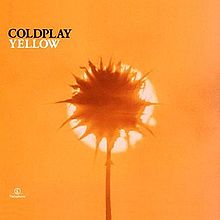 Coldplay’s “Yellow” was the second single from Parachutes, following “Shiver”, and the lead single in the United States. The single reached number four in the UK Singles Chart, giving the band their first top-five hit in the United Kingdom. But how much do we know about the UK’s BBC2’s most-played track of the 2000s?

1. So, what IS it all about, anyway? Well, according to Chris Martin, he was inspired by the stars in the sky being visible at night. Next came the melody, and at first, Martin did not take it seriously “as he relayed the tune to the rest of the band in his worst Neil Young impersonation voice”. Martin has said, “The song had the word ‘stars’ and that seemed like a word you should sing in a Neil Young voice.” In November, 2011, as a guest on the Howard Stern Show, Martin went on to further explain that the word “yellow” has absolutely no meaning whatsoever and while writing the rest of the song he tried his best to change yellow to something else since every lyric before yellow made no sense but in the end the word “yellow” just sounded right. Martin also told Stern that through the years depending on the attitude and manner of whoever interviews him, he would make up some story about a song or album titles just to move on to the next question. Martin applauded Stern saying “I like you, Howard, so that’s the first time I’ve ever told anyone the truth behind ‘Yellow’.”

2. “Yellow” is consistently played during home games at English Championship club Watford, but it was put to good use as the theme music for The Cancer Council Australia’s “Daffodil Day”, in recognition of that organization’s official flower’s yellow hue.

3.The music video for “Yellow” was filmed at Studland Bay in the county of Dorset, South West England, and is one continuous shot with no cuts. Drummer Will Champion’s mother’s funeral was held on the day of the shooting, so it was decided that only Martin would appear in the video, which was also the explanation of his mood during this part.

4. Coldplay performed the song at the ‘Celebrating Steve’ event at the Apple campus in October, 2011. Before the performance, Martin revealed that they first played it for Steve Jobs 10 years ago, Jobs said the song was “shit” and that “they would never make it”.

5. From first heard, the music critics loved it. A Billboard magazine review said, “After one single (‘Yellow’) and its accompanying album (Parachutes … ), Coldplay have already been anointed heir to the Brit-rock throne.” Good call.