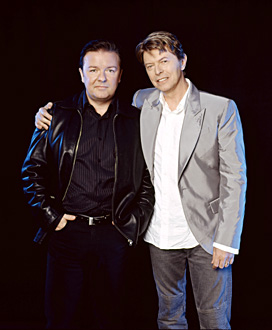 GQ: Did it feel weird that it seemed for a long time that the song he did in Extrasmight be the last David Bowie song?
Ricky Gervais: Yeah, it did. But I can’t deny that there are some things that give me a buzz. He’s been a musical hero of mine for thirty years. When I called him up and I’d written “Little Fat Man” [in the episode, Bowie, playing himself, is annoyed by Gervais’s character at a posh bar and makes up a song on the spot: “Pathetic little fat man / No one’s bloody laughing / The clown that no one laughs at / They all just wish he’d die” and so on], I said, “Have you got the lyrics?” and he went, “Yeah.” I said, “Can you do something quite retro, like ‘Life on Mars’?” And he went [deadpan], “Oh, of course, yeah, sure. I’ll knock off a quick ‘Life on Mars,’ shall I?”

GQ: Would you ask him why he wasn’t doing anything when he was silent?
Ricky Gervais: No. I would never do that. I went the other way. I remember, I think, the first time that I knew him when it was his birthday, I sent him an e-mail that said “57???? Isn’t it about time that you got a proper job? Ricky Gervais, 42, comedian.” He sent back: “I have a proper job. David Bowie, 57, Rock God.”