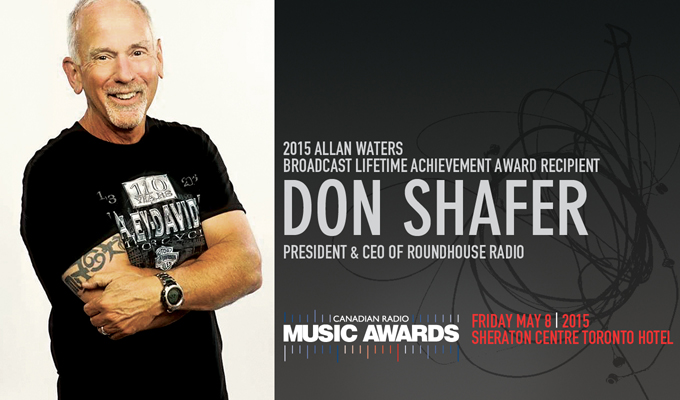 Canadian Music Week is pleased to announce Don Shafer as the 2015 inductee to the Canadian Broadcast Industry Hall of Fame. An innovator and veteran of the industry for more than five decades, Shafer will be honoured for his achievements and longstanding career in broadcasting with the Allan Waters Broadcast Lifetime Achievement Award. The induction ceremony will take place during the Canadian Radio Music Awards luncheon being presented by Bell Media, on Friday, May 8, 2015 at the Sheraton Centre Toronto Hotel.

“I am both humbled and honoured to be the recipient of this award and be in the company of so many good friends, mentors and colleagues,” said Shafer.

A broadcaster, entrepreneur and community activist, Don Shafer has dedicated more than 50 years to the broadcasting industry, earning respect and recognition for his strategic ability to turn around radio stations, revive their image, restore their profitability and make a difference in their local communities. Working both on and off the air, he has collaborated with many of Canada’s best broadcasters developing legendary brands such as CHOM FM, CHUM FM, The Fox, Rock 101, SUN FM and Q107.

“Don spent some great years with us at CHUM and is highly respected throughout the Canadian broadcast industry,” said former CHUM Chairman Jim Waters. “Shafe is a most deserving recipient of the Allan Waters Broadcast Lifetime Achievement Award.”

Shafer has been at the helm of various broadcasting properties including the TorStar Media Group where he helped create Toronto Star TV – a direct response TV enterprise – and developed the company’s television production facilities to extend the Toronto Star newspaper brand into television. He was one of the primary drivers of the successful transition of Standard/Astral/Bell Media’s radio and television properties in the BC interior. A true visionary, Shafer was a proponent and one of the early supporters of webcasting and programming over the Internet.

Under contract with the Jim Pattison Broadcasting Group in Winnipeg, Shafer assisted with the acquisition of QX104 and FAB 94 before engaging in his latest project “Roundhouse Radio”. As President and CEO of the station, along with his team and an independent B.C. ownership group, Shafer will be launching a new “urban” talk radio station in Vancouver in early 2015.

Don is a community activist and a strong supporter of local community organizations. He has served on the boards of Variety Club International in Vancouver and Toronto, The Canadian Culinary Championships and the Kelowna General Hospital Foundation. He is presently working with PFLAG and Qmunity Vancouver, the Canadian Red Cross, the British Columbia Institute of Technology, and the BC Chiefs of Police Association.