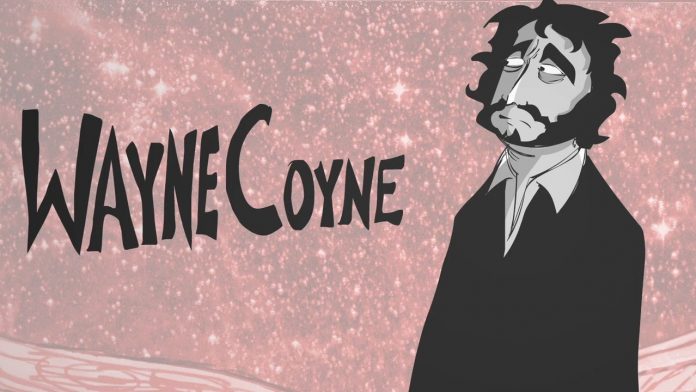 “I’m pouring my guts out so they can feel like your guts at the same time.”
– Wayne Coyne of The Flaming Lips in 2002

When Jennifer Van Evra picked up the phone to interview Wayne Coyne of The Flaming Lips, the last thing she expected was a conversation about death. The Oklahoma natives had just released their gleeful album Yoshimi Battles the Pink Robots and had become known for their rapturously happy live shows. But as their conversation went on that Saturday morning, Coyne showed a side of a rock star you don’t normally get to see. We’re bringing you these outtakes as part of Blank on Blank: a series with PBS Digital Studios that transforms lost interviews with cultural icons into animated short films.

In this episode the animated conversation is about the eternal questions of life and death–and how you can use the inevitable fate we all face to enjoy every moment we have. Coyne talks both about how music helped comfort him while his father was dying and the near-death experience he had as a teenager during an armed robbery while working at Long John Silver’s. The power of music weaves through it all.

Oh, and they used illustrations from Wayne Coyne’s comic book throughout the film. That was cool.

Some more choice quotes from Wayne Coyne:
“Music has the power to transcend your physical being and take you up just a little bit”
“People have all been looking at me in my bare feet, talking existential bullshit ”
“Life is worth celebrating… even though we’re all headed to the same hole at the end of the day”
“I hate this notion I would ever forget how temporary this whole thing is”