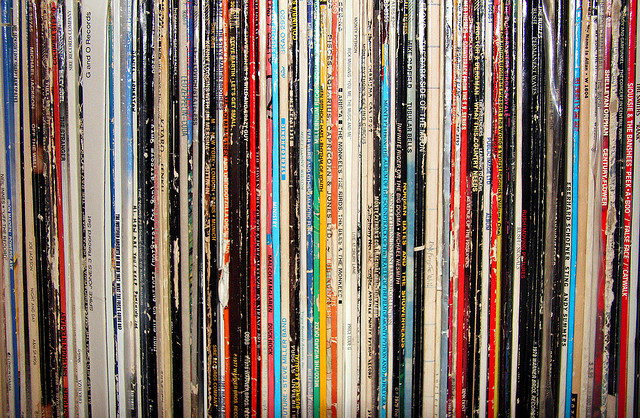 In the first half of 2014, officially registered sales of vinyl in the US stood at around 4m, confirming an increase of more than 40% compared to the same period in 2013. In the UK, this year’s accredited sales will come in at around 1.2m, more than 50% up on last year. That may represent a tiny fraction of the industry’s estimated sales of recorded music, but still, a means of listening to music essentially invented in the 19th century and long since presumed to be dead is growing at speed, and the presses at Optimal – along with similar facilities smattered across the UK, mainland Europe, the US and beyond – are set to grind and pump on, into the future.

“Isn’t it strange?” Runge mused. “I’m an automation engineer. I never thought I’d be dealing with vinyl. It’s unexpected. But it’s also unexpectable.” He shouted this over the din of the machinery. Each press sat in a space not much more than four metres square. Two circular paper labels were mechanically plucked from one end, while tiny vinyl pellets were sucked into a steam-driven heating process. The result was a hunk of plastic with the circumference of a beer mat, heated to 130C, to which the labels were attached, while 50 tonnes of hydraulic pressure squashed and spread it into a disc. Metal stampers pressed against either side, and it was quickly cooled to 40C. With another clunk, the finished product was dropped on to a spindle, ready to be inserted in its sleeve. The whole cycle had taken 27 seconds. Each day, the factory makes somewhere between 50,000 and 55,000 records.

Hanging over everything Runge showed me was an awkward question. While demand for records is increasing year by year, Optimal’s stock of machinery is old, and getting older. New presses are unaffordable, unless the big companies were to invest, but vinyl is still too small a sector of the market for them to be convinced. The kind of painstaking maintenance and technical ingenuity one might think of as the Cadillacs-in-Cuba model keep the industry going. But for how long?