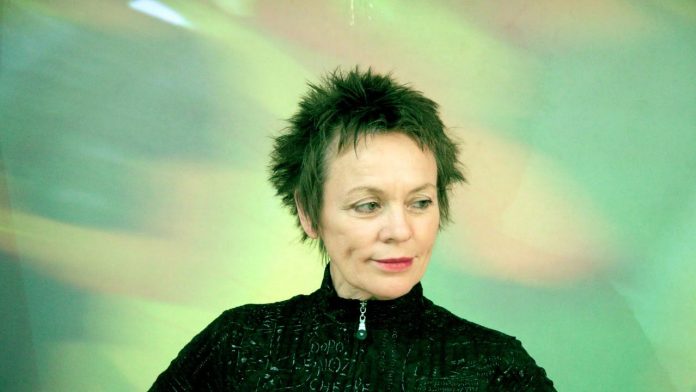 Laurie Anderson, Reed’s partner of 21 years (they were married in 2008), was at the Rock And Roll Hall Of Fame induction ceremony to accept the posthumous honor on his behalf, and deliver some rules of life for anyone to live by. “Don’t be afraid of anyone. Now can you imagine living your life afraid of no one? Two: Get a really good bullshit detector. And three: Three is be really, really tender. And with those three things, you don’t need anything else.”

Thank you all. It’s wonderful to be here in Cleveland, and Lou would’ve loved this. He’s here with his heroes — Otis and Dean. He’s here with B.B. King, who he loved and admired. Aretha, who he saw so many times. His dear friend, Doc Pomus, who taught him so much and with who he sang to in his beautiful record Magic and Loss. Of course, the Rock and Roll Hall of Fame is the place where the names of great musicians become completely magic words – Buddy Holly, Little Richard, the Coasters. And now, Lou Reed is one of those magic words.

Lou’s songs are full of life and complexity, and they’re about who have names. Candy and Caroline, Little Joe and Junior Dad and the man. So, now, they’re all here, too. The people from his imagination along with his serious rock & roll groove. Like he said, “Despite all amputation, you can still dance to a rock & roll station. And it was all right.”

Lou really knew the difference between himself as a writer and himself a person and as a rock & roll star. He’d shift between his rolls with such skill. He could take his fame off like one of his leather jackets, or, he could just decide to use it. The fame, itself, was heavily important. Lou’s genuinely proud of what he’d done and could really appreciate his own work. And, tonight, he would have been so immensely proud to be a part of this.

Lou loved musicians. He played with so many — Ornette [Coleman], [Luciano] Pavarotti, Metallica. He brought Jimmy Scott back out into the light and his early champion supporter, Etienne. He had a really big talent for friendship, and he had so many friends — Hal Willner, Julian Schnabel, Bob Ezrin, Doc Pomus, John Zorn, Bill Bentley, Tony Visconti. And Lou loved hearing new music. He and his friend, the encyclopedic and fantastical Hal Willner, had a radio show called New York Shuffle, which was all about featuring new music and new bands.

In the last year and a half, I’ve heard from literally hundreds of people, and they’ve said how much Lou has changed their lives, pushing them towards something, pushing them to be better. Recently a guitar player told me about the time when she was playing with Lou onstage, and it was some kind of benefit with lots of people stepping out and doing solos. Like many musicians, like Lou, she was nervous about what he had to say about her playing. She stepped out and did her solo and she thought it was pretty good, and after she passed him onstage and said “So?” And he said, “Is that all you’ve got?” She couldn’t believe he said that. She was really frustrated and an hour later, she did another solo, and this time she just stepped on it. And she passed him by again, and he said, “That’s what I’m talking about.”

Lou is a wunderkind. He loved gear, he loved good sound. He was a photographer; he was an inventor; he was a warrior of tai chi. He was a great dancer. He could take watches apart and put them back together. He was kind; he was hilarious; he was never, ever cynical. Lou was my best friend, and he was also the person I admire most in the world. In the 21 years we were together, there were a few times I was mad, and there were a few times I was frustrated, but I was never, ever bored. We were touring musicians, and we often had to be apart.

Recently, a musician friend was telling me that he and his girlfriend were on the road so much that he decided not to live anywhere at all. I said, “How do you do that? Isn’t that disorienting not to have a place anywhere?” And he said, “She is my home.” I realized that was what it was like for me and Lou. It just didn’t really matter where we were. Lou loved his sister Merrill and her family. He loved and admired his Aunt Shirley, who’s also known as “Red Shirley,” who was the subject of his film. He was also a radical innovator and an artist right up until the end of his life. He made groundbreaking work like the live versions of Metal Machine Music.

One of his last projects was his album with Metallica. And this was really challenging, and I have a hard time with it. There are many struggles and so much radiance. And after Lou’s death, David Bowie made a big point of saying to me, “Listen, this is Lou’s greatest work; this is his masterpiece. Just wait, it will be like Berlin. It will take everyone a while to catch up.” I’ve been reading the lyrics and it is so fierce. It’s written by a man who understood fear and rage and venom and terror and revenge and love. And it is raging. Anyone heard Lou sing “Junior Dad” will never forget the experience of that song, torn out of the Bible. This was rock & roll taken to whole new levels.

Lou understood pain and he understood beauty. And he knew that these two were often intertwined and that was what energized him. In this duality between yin and yang, he was also in tai chi and he was a tai chi master and he had the most beautiful meditation master of tai chi all over the world. As meditators and students of Buddhism, for many years we often talked about the advice of our Buddhist teacher, which had become central for our lives. One of the things our teacher told us — and something we tried very hard to learn — was this, he said, “You should try to practice how to feel sad without actually being sad,” which is really hard to do, how to feel sad without actually being sad.

As I said, Lou taught me a lot about growth, and I found out what it is to love and to be completely loved in return. This will be a part of me for the rest of my life. It’s also something that changes you forever, to have the love of your life die in your arms. And when Lou died in mine, I watched as he did tai chi with his hands, and I watched with joy and surprise that came over his face as he had died, and I became less afraid. One more thing he taught me. It crosses my mind every hour. It seems like after a year and a half, I’m still waiting for him to call, and sometimes he actually does call. And suddenly I remember one of his phrases or some random words or songs he made up, and I’m reminded also the three rules we came up with, rules to live by. And I’m just going to tell you what they are because they come really handy, because things happen so fast, it’s always good to have with you, like patchworks to fall back on.

And the first is, one: Don’t be afraid of anyone. Now can you imagine living your life afraid of no one? Two: Get a really good bullshit detector. And three: Three is be really, really tender. And with those three things, you don’t need anything else. For people with experience when their partners die, you’re compelled into a magical world where you fully understand many things that were complete mysteries up to that point. And so funnily, I see how people can turn into legs, and turn into music, and eventually turn into other people, and how fluid these bones are. And that’s what the Hall of Fame to me is all about, the transformation of people who took names that stand in beauty and style.

They say you die three times. The first is when your heart stops, and the second is when you’re buried or cremated. And the third is the last time someone says your name. I am so happy that Lou’s name is added to the list of people who will be remembered for the beautiful music that they made. Lou, my sweet lover, I love your last song, “The Power of the Heart.” You know me, I like to dream a lot. Of what there is and what there’s not. But mainly, I dream of you a lot. The power of the heart, the power of the heart. I accept this in your name. One more Lou.