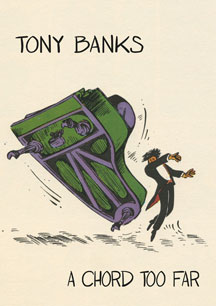 Esoteric Recordings has annouced the release of the first ever boxed set celebrating the solo work of Genesis founding member Tony Banks. A CHORD TOO FAR is a deluxe 4 CD set comprising 48 songs and pieces, all personally selected by Tony. Many tracks have been remixed exclusively for this collection and have been drawn from his seven solo albums; A CURIOUS FEELING, THE FUGITIVE, THE WICKED LADY (film score), SOUNDTRACKS , BANKSTATEMENT, STILL, STRICTLY INC. and his two orchestral albums SEVEN – A SUITE FOR ORCHESTRA and SIX PIECES FOR ORCHESTRA. A CHORD TOO FAR also includes four previously unreleased tracks, three of which are keyboard demos of his orchestral suites. The fourth is a piece originally written for the album STILL.

Inducted into the Rock and Roll Hall of Fame in 2010 as a member of Genesis, Tony is one of the most respected songwriters and keyboardists in the world. His career spans almost 50 years and has seen him sell in excess of 130 million albums . His body of work is as innovative as it is eclectic. Genesis’ avant-garde style made them one of progressive rock’s founding fathers in the 1970s, creating an experimental style of rock music never before seen. Tony Banks’ solo work has continued in the same vein. His rock albums have included collaborations with some of the world’s most respected musicians including singers Toyah Wilcox, Fish and Nick Kershaw, bassist Pino Pallodino, and drummers Steve Gadd and Vinnie Colaiuta , as well as long time Genesis collaborators Daryl Stuermer and Chester Thompson.

In addition, he has composed original scores for four films The Shout (1978), The Wicked Lady (1983), Starship (1985) and Quicksilver (1986) and most recently his orchestral albums, Seven: A Suite for Orchestra and Six Pieces for Orchestra, that were performed by the London Philharmonic Orchestra and City of Prague Philharmonic Orchestra respectively. A CHORD TOO FAR is a fine celebration of Tony Banks’ work outside of Genesis and will be available on August 14, 2015.

Disc 1:
Rebirth
At The Edge Of Night
Walls Of Sound
Lion Of Symmetry
The More I Hide It
Shortcut To Somewhere
The Waters Of Lethe
I Wanna Change The Score
Water Out Of Wine
Something To Live For
By You
Never Let Me Know
Thirty Three’s

Disc 2:
Charity Balls
An Island In The Darkness
The Border
Lucky Me
Another Murder Of A Day
Moving Under
Still It Takes Me By Surprise
Red Day On Blue Street
After The Lie
Redwing

Disc 3:
Queen Of Darkness
A Piece Of You
Big Man
Angel Face
This Is Love
I’ll Be Waiting
Back To Back
For A While
Throwback
You Call This Victory
And The Wheels Keep Turning
You
The Final Curtain