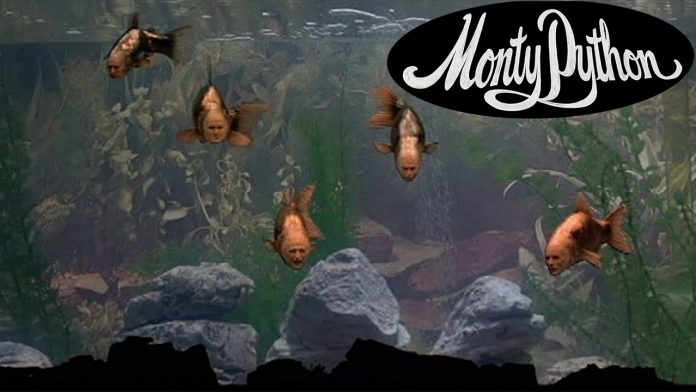 Here’s the Find The Fish scene, taken from Monty Python’s The Meaning Of Life called “The Middle Of The Film.” Terry Jones picked this as part of his Top 10 Monty Python Movie Moments for Esquire Magazine. He says, “Originally, we were going to have a load of stars—like Sean Connery and Julie Andrews—saying, ‘This is the middle of the film,’ but it was too hard to organize. But it turned out all right, because this is the inside of the Battersea Power Station, with those beautiful parquet floor and magnificent ceiling, and it doesn’t exist anymore. I think this is Python at its surreal best.”

After a brief, surreal piece in which a drag queen (Graham Chapman), a gangly long-armed man (Terry Jones), and an elephant-headed butler eerily challenge the audience to find a fish in the scene, all six members of Monty Python appear as fish swimming and chatting to each other in a restaurant fish tank.