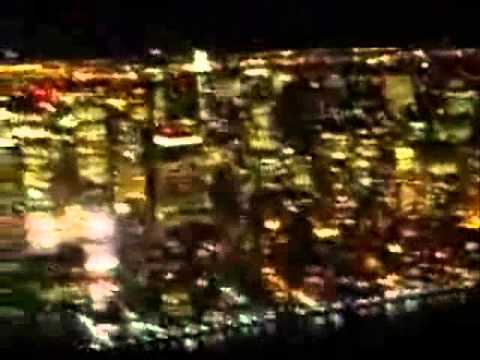 Dan Ingram was manning the microphone at 77 WABC radio in New York City back in 1965, when all of a sudden the power started going out of the music. The cart machines began to grind to a crawl . . . then the lights went out. They went out all over New York City. In fact the entire Northeast went dark from Maine to southern New Jersey.

An aircheck of New York City radio station WABC from November 9, 1965 reveals disc jockey Dan Ingram doing a segment of his afternoon drive time show, during which he notes that a record he’s playing (Jonathan King’s “Everyone’s Gone to the Moon”) sounds slow, as do the subsequent jingles played during a commercial break. Ingram quipped that the King record “was in the key of R.” The station’s music playback equipment used motors that got their speed timing from the frequency of the powerline, normally 60 Hz. Comparisons of segments of the hit songs played at the time of the broadcast, minutes before the blackout happened, in this aircheck, as compared to the same song recordings played at normal speed reveal that approximately six minutes before blackout the line frequency was 56 Hz, and just two minutes before the blackout that frequency dropped to 51 Hz. As Si Zentner’s recording of “(Up a) Lazy River” plays in the background – again at a slower-than-normal tempo – Ingram mentions that the lights in the studio are dimming, then suggests that the electricity itself is slowing down, adding, “I didn’t know that could happen”. When the station’s Action Central News report comes on at 5:25 pm (ET), the staff remains oblivious to the impending blackout. The lead story is still Roger Allen LaPorte’s self-immolation at United Nations Headquarters earlier that day to protest American military involvement in the Vietnam War. The newscast gradually fizzles out as power is lost by the time the newsman starts delivering the second story.