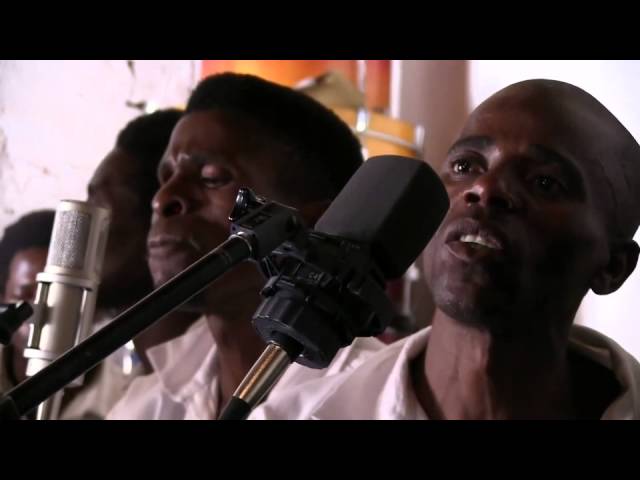 In a rare, real-life underdog story, the male and female prisoners of Zomba Prison in Malawi scored a surprise coup this past week by receiving a Grammy nomination for this year’s awards. Alongside titanic names of the World Music genre– Gilbert Gil, Ladysmith Black Mambazo, Anoushka Shankar, and Angelique Kidjo (who won the award last year)— the prisoners are the sole unknowns and newcomers.

Produced by Grammy-winning music producer and author, Ian Brennan (Tinariwen, Ramblin’ Jack Elliott), the record features the voices and songs of prisoners from of one of the world’s #1 poorest country’s maximum-security prison.

Zomba Central Prison, a dilapidated 19th century brick structure, more resembles a factory from a Dickens novel. Most prisoners lack the funds for even a basic defense, and can be detained for decades or even life. Convicted of offences ranging from theft to murder, many of the women are held indefinitely merely due to allegations of witchcraft, or the men for acts of homosexuality— which remains a criminal offence that can result in up to a fourteen year sentence. Often, these are charges that have resulted from counter-accusations made by their own assailant(s), following the victim’s attempts to seek help after first being victimized.

In the words of more than one resident: “Every sentence here is a death sentence. If you don’t have HIV when you enter, you will by the time you leave.”

Overstuffed to nearly ten times the building’s capacity— thus, forcing individuals to literally sleep astride and on top of one another at night, head-to-toe like sardines– many of the men and women are incarcerated for such dubious charges as “witchcraft” and homosexuality. Compounding the overpopulation of the prison, many of the guards also live on the grounds, just outside the walls, in conditions that are only slightly better than their charges.

Brennan and Italian documentary filmmaker and photographer Marilena Delli were granted special access by the head of prisons in exchange for Brennan providing violence-prevention classes for some of the inmates and guards (a subject that he has been a sought-after expert in for decades and has authored two books on the topic). Brennan and Delli were sworn to the utmost secrecy, and at one point were detained briefly for sneaking photos in a forbidden area. At another moment, they were caught amidst a brawl and witnessed guards beating a prisoner who attempted escape through the main door.

To raise awareness about the prisoners’ situation, and to advocate on inmates’ behalf, Brennan and Delli have established the Zomba Prison Project. A portion of the proceeds from sales of the I Have No Everything Here album help fund legal representation and other support. Since the Zomba Prison Project’s formation in the summer of 2013, three incarcerated women have gained release, and two other cases are now under review.

Sadly, though, one of the women featured on the album had already suffered the loss of her toddler, who was also imprisoned with her. And, then a year later— though only 37 years of age— she too perished within the walls of this same institution.