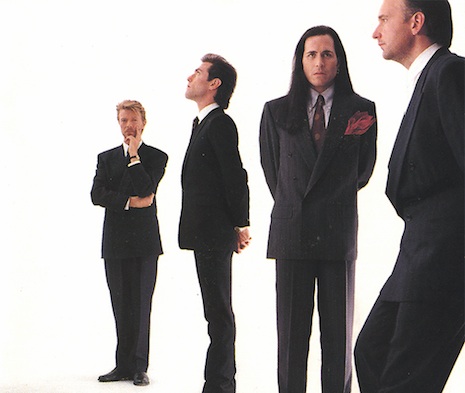 Tin Machine were an English-American hard rock band formed in 1988, famous for being fronted by English singer-songwriter David Bowie. The band consisted of David Bowie on lead vocals and guitar, Reeves Gabrels on guitar, Tony Sales on bass, and Hunt Sales on drums. Guitarist Eric Schermerhorn was an unofficial fifth member of the band. The group recorded two studio albums before dissolving in 1992, when Bowie returned to his solo career. Drummer Hunt Sales said that the group’s name “reflects the sound of the band,” and Bowie stated that he and his bandmates joined up “to make the kind of music that we enjoyed listening to” and to rejuvenate himself artistically. Over the course of their career, the band sold two million albums, and never really got a lot of respect from the critics, but perhaps a re-think is in order.

Bowie himself was surprised with how things came together with the band, saying in an interview with The Star Entertainment Weekly:

I’d never wanted to be in a band until we got together. And as we were getting together, it wasn’t really occurring to me that this is what I wanted to do. It took a week or so of actually being in the studio and working, and then I think we fully realized the potential, musically, for what we were doing and wanted to stick with it. I was quite happy to go off and make a solo album. I was quite excited about a couple of things I was doing, which I brought into the band and which were irrevocably changed. But that’s the nature of the band.