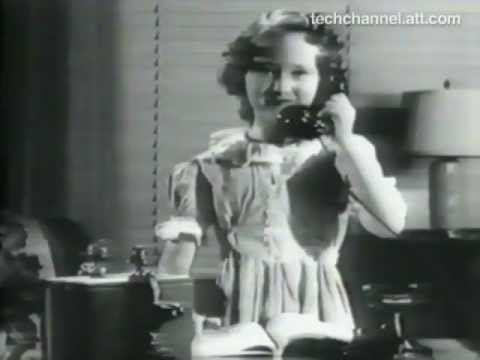 This short subject newsreel was shown in movie theaters the week before a town’s or region’s telephone exchange was to be converted to dial service. It’s extremely short—a little over a minute, like a PSA. The film concisely explains how to use a dial telephone, including how to dial, how to recognize dial tone, and how to recognize a busy signal.

The first dial telephonewas manufactured in 1897. It was part of an automatic switching/dialing system invented by Almon Strowger and patented in 1889. (You can see this switching system in action on the film “The Step By Step Switch”). But the Bell System didn’t start to roll out Strowger’s invention until 1919, though they did showcase the technology in 1904. In 1922, New York City was introduced to dial. The first popularized dial telephone was a desk set candlestick model; the smaller, more familiar desk set came later.

It took decades for dial to sweep the entire Bell System. The last holdout was Catalina Island, off the coast of California, which finally converted to dial in 1978. In Camp Shohola, Pennsylvania, an internal automatic switch system still connects campers with the outside world, it’s the oldest functioning Strowger switch in the world.