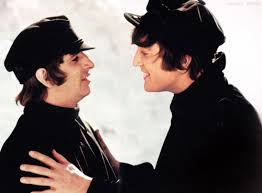 A television commercial for Ringo Starr’s 1974 album Goodnight Vienna, which featured a voiceover from John Lennon, depicted the cover’s flying saucer (with Starr) over Los Angeles-landing on the roof of the Capitol Records building in Hollywood,

Starr returned the favour and did the voiceover for the commercial for Lennon’s Walls and Bridges album.