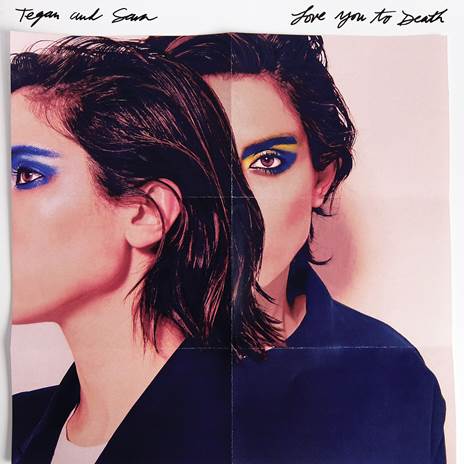 Tegan and Sara have announced their forthcoming album Love You to Death today. Recorded in Los Angeles, Love You to Death is the band’s 8th studio album and once again finds the group working with producer Greg Kurstin (Adele, Sia, Beck, Ellie Goulding). It is slated for release on June 3rd while the first taste of music from the album is due April 8th, the same day that preorders begin.

Love You to Death is the follow up to Tegan and Sara’s pop breakthrough album Heartthrob, which featured the singles “Closer” and “I Was a Fool” which were double platinum and platinum certified in Canada, respectively. In addition to this, the band were featured on the LEGO Movie single “Everything is Awesome” with The Lonely Island, and were invited to perform that song as part of the 2015 Oscar telecast.

Tegan and Sara will be performing in Toronto during Canadian Music Week at the iHEARTRADIO Fest on Friday, May 6th. Click here for tickets to this performance. Further Canadian dates will be announced in the near future.

Born in Calgary, Alberta and now residing in Vancouver, BC, Tegan and Sara’s career numbers are impressive. They have sold over 1 million albums and collected 7 Gold certifications, 1 Double Platinum certification, 3 Juno Awards, 2 Polaris Prize nominations, and a Grammy nomination.