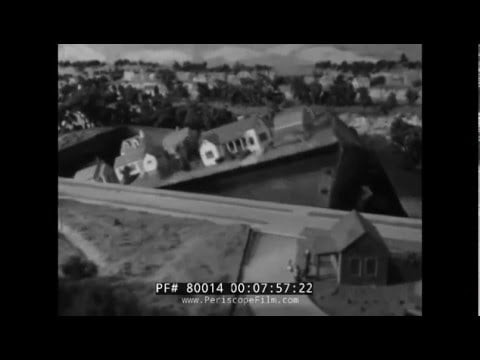 This film shows the exhibit known as OUR AMERICAN CROSSROADS in operation. Originally created for the General Motors Parade of Progress, this exhibit still exists and is maintained by GM. It was built by the H.B. Stubbs company and was on display at the Chicago Museum of Science and Industry until 2001 when it was removed by GM. The Our American Crossroads display is an animated diorama of American life. It depicts lifestyles before and after the introduction of the automobile and a futuristic look years down the road. Starting with (as the narrator says) “a sleepy, rural crossroad consisting of muddy roads, a rickety wooden bridge and a few scattered farm houses, you see a simple story of American growth and development unfold before your eyes. Beginning with the first appearance of a horseless carriage – this ever-changing diorama dramatically traces the impact of the automobile on the isolated community. The transformation from a muddy crossroad to a modern bustling community, vividly illustrates the important role played by the automobile in the rapid growth of America. We have progressed from a country of isolated rural communities and scattered cities – to an integrated land connected by a great network of roads and highways, and we have come this far in only sixty years.”