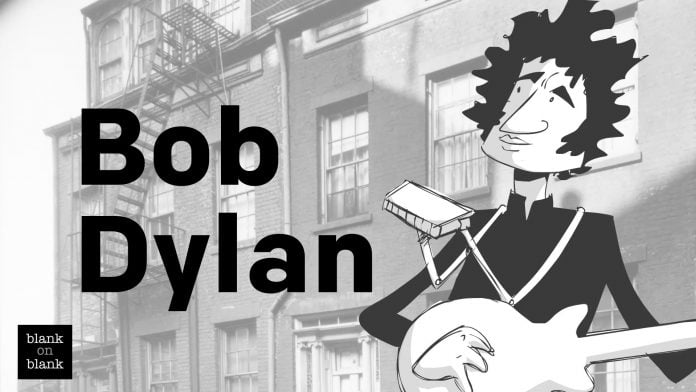 Dylan was just 20 years old when he appeared on the Folksingers Choice radio program on WBAI FM in New York City. He’d arrived in Manhattan just a few years earlier and was playing in the coffee houses of Greenwich Village, at one in particular he was paid “a dollar plus a cheeseburger.”

During this hour-long interview with Cynthia Gooding, Dylan played some of his own songs (“The Death of Emmett Till”, “Standing on the Highway”) and covers of classics by Howlin’ Wolf, Hank Williams, and Woody Guthrie. We scored this Blank on Blank with Dylan tuning up his guitar and playing his harmonica.

It’s a wonderful snapshot in time, with a young Dylan before he was famous and before he even released his debut album. He’s nervous and funny. He’s just a guy with a guitar with a little mischief underneath.