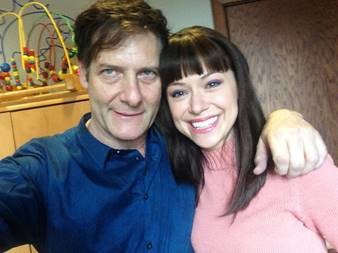 Singer, songwriter, and vocal coach Micah Barnes is elated after his client and friend Tatiana Maslany took home the Emmy for best lead actress in a drama on Sunday for her multiple roles in the sci-fi series “Orphan Black.”

“Nobody was rooting for her to win harder than I was,” says Micah, who released his New York Stories album in April, 2016 through eOne Music Canada. “Focus, authenticity and determination are the main ingredients for an artist’s success and longevity,” and feels Maslany’s win will ” artistically and spiritually enhance, uplift, and inspire this and succeeding generations of artists, actors and actresses, and singers in Canada, and around the world.”

A Juno-nominated recording artist, Micah is also one of Canada’s best-known vocal, performance and career strategy coach and recording artist whose own career has included #1 Billboard hit Welcome To My Head as well as recording and performing internationally with the popular A Capella group The Nylons. Micah is currently touring the country with his own solo cabaret show in support of his latest release New York Stories.

Micah Barnes is a top industry coach used by Managers, Labels, Producers and Directors in the Canadian and U.S. through his Singer’s Playground company. His coaching credentials include Andrew Lloyd Webber’s hit CBC TV show How Do You Solve A Problem Like Maria and the original cast of Tomson Highways The Rez Sisters. He has coached cast members of Mirvish’s The Sound Of Music and Broadways Pricilla Queen Of The Desert as well as pop artists such as So You Think You Can Dance Canada’s” Blake McGrath.

Micah Barnes founded The Singers Playground in 1996 in order to support the next generation of artists through workshops, seminars and one on one coaching and is truly delighted to get to work with so many talented artists in both Canada and The United States.