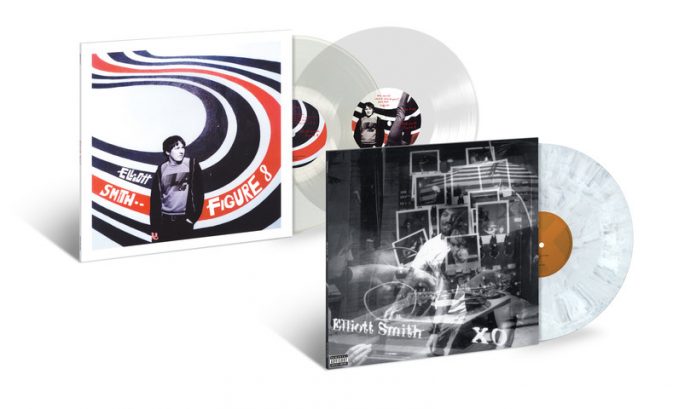 Elliott Smith’s major label debut masterpiece, XO, and his kaleidoscopic final studio album, Figure 8, will be reissued on vinyl on April 7 via Geffen/UMe. The modern classics will be released on standard weight black vinyl with faithfully replicated original artwork and sleeves. Both albums will also be available in limited colored vinyl editions exclusively on UDiscover Music. Limited to 500 copies worldwide, XO will be pressed on black and white marbled vinyl while Figure 8‘s two LPs will feature LP1 on clear vinyl and LP2 on white. The albums are available now for preorder:
XO: https://UMe.lnk.to/XOLP
Figure 8: https://UMe.lnk.to/Figure8LP

XO signified a major evolution for Smith and a critical turning point in his career, away from the lo-fi indie folk confessionals laid bare on his previous three albums and toward a more stereophonic, full band sound. XO was released August 25, 1998, just a few months after Smith was reluctantly thrust into the spotlight with a life-changing performance at the Academy Awards for his Oscar-nominated song, the Good Will Hunting closer, “Miss Misery.” With the backing and resources of his new label DreamWorks Records and the help of producer team Rob Schnapf and Tom Rothrock, Smith embraced his opportunity to create a lush, ambitious, and beautifully complex album unlike anything he had done before. XO finds Smith coloring his introspective acoustic songs, still filled with understated melodies and barbed one-liners, with shades of rich, Beatlesque production, string-laden baroque pop and spirited rock.

While “Sweet Adeline” opens the album with Smith’s hushed vocals and gentle fingerpicking, familiar of what fans had come to expect from him, the song takes a dramatic and unexpected turn halfway – as if switching from black and white to color – with an explosion of piano, drums, bass and Smith’s soaring voice. It was a bold assertion that this was not going to be a quiet singer-songwriter record. Indeed, XO, which saw Smith playing most instruments, was his most expansive album to date, filled with exquisite arrangements, masterful pop song craft, and a musically diverse collection of songs. Tracks like the aggressive “Amity” and horn-filled “A Question Mark” echoed Smith’s former band Heatmiser’s grungy indie rock and hinted at his punk roots while the jaunty “Baby Britain” displayed his knack for an indelible melody. Album centerpiece and first single, “Waltz #2,” described by Stereogum as the apex of his career — “ambitious, bold, intoxicating, and beautiful” — included some of Smith’s most biting lyricism and culminated with the unsettling squelch of bowed strings. Some of his finest guitar playing is evident on “Independence Day” and “Tomorrow Tomorrow.” The album concludes with an emotional one-two punch to the gut: the rollicking kiss-off anthem, “Everybody Cares, Everybody Understands,” followed by the haunting multi-tracked a capella, “I Didn’t Understand,” which proved that Smith could be equally powerful at his most bare.

Universally hailed upon release, XO topped best of lists in 1998 and continues to resonate, as powerfully moving as ever, nearly 20 years later. The album is consistently included on greatest albums lists and is featured on Spin‘s “Top 125 Albums of the Past 25 Years” and Pitchfork‘s “Top 100 Albums of the 1990s.” Praising the album, Pitchfork wrote, “Elliott Smith used his DreamWorks debut, XO, as an opportunity to further focus the emotional power of his previous releases. Melancholy and grandiosity may seem mutually exclusive, but on XO, they’re combined to wonderful effect, each crystalline guitar line and majestic piano arpeggio adding momentum and depth to Smith’s gorgeous and impassioned vocals.”

Following the breakout success of XO, Smith again teamed up with producers Rob Schnapf and Tom Rothrock for his Technicolor follow up, Figure 8, released April 18, 2000 on DreamWorks. The album was recorded throughout 1998-2000 at several studios including Sunset Sound and Capitol Studios in Los Angeles and Smith’s musical temple, Abbey Road Studios in London, where Smith used the piano that The Beatles used to record “Fool On The Hill.” Unlike XO‘s major shift from the albums that came before it, Figure 8 continued Smith’s penchant for ambitious arrangements but took them into even bigger, bolder and sometimes weirder territory.

Rolling Stone praised the album, saying, “Like its predecessor, Figure 8 is full of modern chamber pop, mixing in keyboards, strings and studio flourishes on melodically simple, yet structurally complex songs. ‘Somebody That I Used to Know’ and ‘I Better Be Quiet Now’ hearken back to the bare acoustic setting of Smith’s first solo albums, while jangly opener ‘Son of Sam’ and the rainy-day rocker ‘Junk Bond Trader’ sound like long-lost radio singles.” The AV Club enthused, “Figure 8 is even better, a strong collection of lush, densely arranged power-pop (‘Son Of Sam,’ ‘Junk Bond Trader’) and inimitably intimate ballads (‘Somebody That I Used To Know,’ ‘Easy Way Out’),” adding the album “never breaks from delivering Smith’s songs with ornate elegance and a sublime mastery of pop hooks.” Rolling Stone placed Figure 8 on their list of the 100 greatest albums of the decade and it was included in the book “1001 Albums You Must Hear Before You Die.”

Figure 8’s iconic cover was shot by photographer Autumn DeWilde in front of a mural in the Los Angeles neighborhood of Silver Lake, where Smith lived. Upon Smith’s death in 2003 it became a makeshift memorial and gathering place for grieving fans. Although altered over time, the mural continues to stand as an unofficial landmark for the acclaimed and beloved musician.