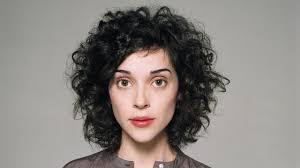 St. Vincent: You know what I find very strange? Airlines, like all airlines now, when you’re boarding the plane and when you land, they immediately turn on music. It’s a very strange idea to me that there would be some kind of music that pretty much everyone would like. I’m not a superstitious flier and I fly all the time and it doesn’t bother me at all, but it would really bum me out if a certain adult-contemporary song was the last song I heard before I went down in a blaze of glory.

What music is playing? This is why I wear headphones.

St. Vincent: It’s just aggressively middle-of-the-road. It’s weird and it just feels like capitalist propaganda. Even in airports now, there’s always music, although I will say Terminal 8 at JFK will put on some Tears for Fears. And JetBlue will actually have a song that you’re pretty psyched about hearing, ’80s hits.

Eighties hits have kinda crossed into the modern mainstream.

St. Vincent: Yeah, like, if the last song I heard was “Rich Girl” on an airplane, I’d be like “OK.” I get it, that’s a hilarious way to sum up my life.