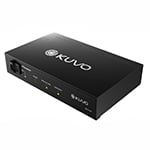 SOCAN today announced it has partnered with Pioneer DJ Corporation of Japan to become the first music rights organization in North America to use direct metadata extraction technology, KUVO, to identify electronic dance music performances automatically and seamlessly in nightclubs and other electronic music venues.

The Pioneer-KUVO device is being provided voluntarily to nightclubs, beginning with the Toronto area, as an additional aspect of their SOCAN music license agreement. Once installed, the KUVO device easily plugs into a DJ’s mixing board, capturing metadata from the music, which is then collected and relayed to SOCAN to tabulate and distribute royalties more accurately to the copyright holders of the music.

Simply put, KUVO helps to ensure that the correct owners of music used in nightclubs are compensated accurately from the music licenses already being paid. There are no additional costs, expectations or maintenance required from electronic music venues that voluntarily adopt the easily-installed system.

“For years we’ve been dissatisfied with the system in place, knowing that not all licenses we pay are getting in to the hands of artists behind the music played in our venues and at our events,” said Joel Smye, owner of CODA nightclub in downtown Toronto, one of the largest and most successful electronic music venues in Canada and the first to adopt the technology. “Now, through technology, the use of a simple device will ensure that the music licenses that we pay and have always paid will go to the right people.”

The initiative is championed by the Association for Electronic Music (AFEM) in support of its global campaign “Get Played, Get Paid,” that seeks to ensure dance music creators are accurately compensated for the use of their work.

“Everyone wants to be paid fairly for their music, and I hope that clubs and festivals will be eager to use technology to help ensure that the right people get their fair share of the legal music licenses that they already pay. Props to SOCAN for using the latest technology of KUVO to be even more accurate and transparent for music creators like me,” said dance music DJ, producer, and SOCAN member, Richie Hawtin, who recently collaborated with KUVO through his own music-recognition platform, RADR.DJ.

“DJs spin more music in one show than the vast majority of other live musical performances, but it’s nearly impossible for them to submit accurate set lists of music for shows that they perform,” said Vice President of SOCAN’s Distribution department, Kit Wheeler. “Pioneer-KUVO technology addresses this problem and enables SOCAN to capture even more musical performances in real time and more accurately. Our partnership with Pioneer and KUVO is a great step forward in getting our more than 150,000 members fairly paid for their work.”

“We’re delighted that SOCAN will use metadata from KUVO and we hope that other PROs in North America will see how accurate the service is and come aboard,” said Pioneer DJ’s General Manager, Mark Grotefeld. “It’s a huge territory and currently there’s a lot of the money paid by the venues in license fees that isn’t finding its way to the artists who deserve it. KUVO can help solve that problem and reward those who produce the music played by DJs.”

Nightclubs are required by law to pay licenses to SOCAN and other music rights organizations for the blanket use of music that they use for their business. Without technology like KUVO, matching license payments with the correct music rights holders would be done manually and can be an onerous task for either the DJ or the nightclub. Music creators depend on royalties to sustain and build their career.
As a result of KUVO technology being implemented first at the CODA nightclub, royalties from the use of electronic music by DJs will begin flowing to SOCAN members and international rights holders as of November 2017.