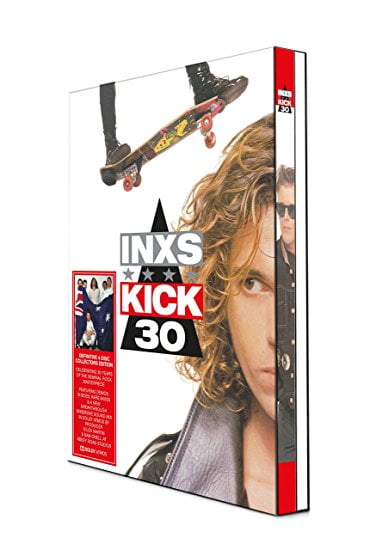 2017 marks a triumvirate of anniversaries for the legendary Australian rock band INXS. It’s now 40 years since they first formed the band; 30 years since Kick made them global superstars; and 20 years since the untimely passing of their iconic frontman and friend Michael Hutchence. INXS are celebrating these major milestones with a huge suite of CD and vinyl releases, leading off with the 30th anniversary edition of the much-lauded Kick.

Housed in glorious DVD size fan-deluxe packaging, the 30th anniversary edition of Kick extends previous editions with additional B-sides, rare mixes and bonus tracks over 3CDs. In addition, it will feature the album mixed in Dolby Atmos® by producer Giles Martin and Sam Okell at Abbey Road Studios. The new mix appears on a Blu-ray disc along with all the promo videos. Dolby Atmos is an immersive sound technology that delivers the best listening experience on any device with a new dimension of clarity, fidelity and space.

“It is really surreal that 30 years ago when 3 record label companies rejected this album,” says Petrol Records Chairman & CEO, Chris Murphy. “Now, it is revolutionized through the incredible, incredible ATMOS technology through one of my favorite people in the world, Mr. Giles Martin.”

For vinyl enthusiasts, there will also be a Half-Speed Remaster of the classic 1987 album cut over two heavyweight, 180g black vinyl LPs at 45-RPM for supreme fidelity, cut by Abbey Road Studios’ Half-Speed Mastering pioneer, Miles Showell, who says: “Having owned this album since 1987 and even cut the UK 7” lacquers for ‘Need You Tonight’, I was thrilled to be asked to remaster it as a double 45 half-speed mastered LP.” The vinyl release date is February 9.

“Classic, fabulous pop songs that jump out of the speakers, now more than ever before!“ Andrew Farriss of INXS says of Kick’s new edition. “The latest INXS vinyl cuts are an outstanding sonic achievement, especially the Kick album. I was truly amazed to hear INXS’ recordings sounding so incredibly fresh, clear and kick-ass, like vinyl on steroids…”

Originally formed in 1977, INXS’s career spans an extraordinary 40 years, during which they have sold over 40 million records worldwide, including Number 1 albums in four different continents. Delivering an avalanche of hits including “Need You Tonight,” “New Sensation,” “Never Tear Us Apart,” “Devil Inside” and “Mystify,” Kick sold over six million copies worldwide and made INXS one of the biggest bands on the planet.

A force of nature in their prime, the band returned to the top of the Australian charts with the success of 2014 mini-series INXS: Never Tear Us Apart. Ready to turn heads all over again, Kick’s 30th anniversary edition provides the perfect opportunity to get reacquainted with this most timeless and ground-breaking of bands.