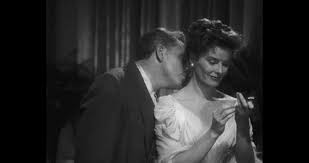 Songs have been composed, books have been written and movies have been shot with the goal of telling the story of the Katharine Hepburn-Spencer Tracey romance. The couple, which spent 30 years together, kept company in places as diverse as the Miami Club Casino and the English countryside.

Their relationship was an open secret but they never flaunted it in deference to Tracy’s wife, Louise Treadwell. They kept their partnership quiet but the scandal must have been hard for them to bear.

A summary of the Tracy-Hepburn romance and some interesting observations and suspicions:

Spencer Tracy and Katharine Hepburn met on the set of the film Woman of the Year. They were preparing to shoot the 1942 romantic comedy when sparks flew and history was made. That first movie launched one of Hollywood’s most enduring love stories.

The two actors were drawn to each other from the beginning. The script highlighted their evident attraction and provided fuel for the fire, both for the movie and for their personal lives. Katharine’s first words to Tracy, upon meeting on set for Woman of the Year, were “I fear that I may be too tall for you, Mr. Tracy.”  Within a week they were calling each other Kate and Spence  as they discovered their magic. Gene Kelly, a co-star on the film, once recalled “At lunchtime they’d just meet and sit on a bench on the lot. They’d hold hands and talk—and everybody left them alone in their little private world.”

The forgotten character in this drama was Louise, the mother of Tracy’s two children. Tracy, a Catholic, felt that he couldn’t divorce his wife but he had already been separated and he moved into a cottage near Hepburn’s Beverly Hills home. They were respectful of Louise, making sure to never be photographed together or seen keeping company, but Louise suffered in silence.

The Tracy-Hepburn romance was an open secret in Hollywood but Tracy remained committed to protecting his wife and 2 children, John and Susie. John, in particular, needed a high level of care because he was diagnosed as being profoundly deaf while still a baby. Tracy reacted emotionally, showing the Catholic guilt that would characterize much of his relationship with Hepburn and his unwillingness to divorce Louise.

Lorraine Foat, a friend from Spencer’s days in repertory theatre, commented that ‘He adored his son. ‘But he felt terribly about it. He suffered over it, feeling that somehow or other he had failed.’ Yet he also felt that Louise had given her life to John and put Spencer in second place. ‘He gave me the feeling that she wasn’t too attentive to his needs … I don’t like to put words into his mouth, but the feeling I got was that: “Gosh, I don’t know, but Louise is so cold.”

Joe Mankiewicz, film director, screenwriter, and producer who worked with both Tracy and Hepburn, summarized Tracy by saying “He didn’t leave Louise. He left the scene of his guilt.”

Louise put a strong face on the situation. She told reporters “I’ve repeatedly told him to go out with other people,” she said in an interview. “Occasionally he’s gone out with some of the girls he’s worked with. I haven’t minded, because he always told me about it….I can’t truthfully say that Spencer and I are still madly, passionately in love with each other. I don’t believe that kind of love ever lasts. But in its place comes a deep understanding, companionship and devotion.”

Although the marriage between Spencer and Louise evolved into a kind of business partnership, Louise’s commitment to her children, especially to John’s education (she started a school for the deaf) became an overriding obsession for her and a focus for Spencer as he romanced Kate and even cheated on her.

Hepburn tried, after Spencer’s death, to make amends to Louise. She called her a few days after Spencer’s death and suggested that they bury the hatchet and be friends. “I thought that you were a rumor” Louise told her, which hurt Katherine. The two didn’t communicate after that encounter.

Larry Kramer, a noted gay rights activist in Hollywood, has put forth the theory that Hepburn and Tracy were gay. Kramer is an Oscar-nominated author and screenwriter.  “In the ’30s and ’40s, there were plenty of famous gay actors and directors who partied and socialized together,” Kramer said. “It certainly was very, very discreet, but everyone knew what was what. Everyone in Hollywood knows this is true.”

Kramer, however, did not provide proof of his claims.

Katherine once spoke of Tracy having hit her. She said that he smacked her across the face when he was drunk. Yet the famously independent actress refused to end her relationship.  “If I had left, we both would have been miserable,” Hepburn told biographer A. Scott Berg.  For the book “Katharine Remembered,” Berg wrote that Tracy hit Hepburn in the face at the Beverly Hills Hotel while she was trying to put him into bed. He didn’t remember it in the morning and Hepburn didn’t remind him of the incident, saying that she didn’t want to do anything to impair the relationship.

Others have noted that Hepburn didn’t want to create a schism that would define the relationship by guilt – the same type of guilt that bound Spencer to his estranged wife.