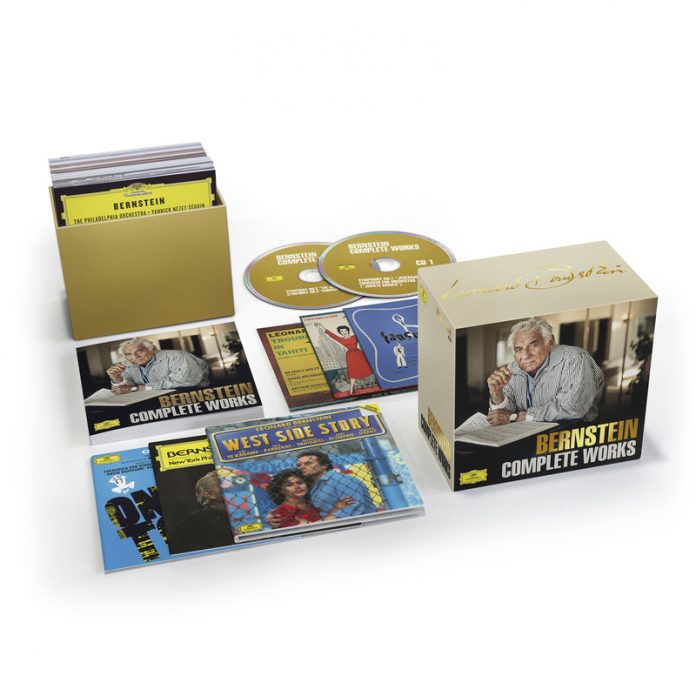 Leonard Bernstein unquestionably was one of the most astonishing and dazzling personalities in the world of music. He bestrode the musical scene in the second half of the 20th century like few others: Composer, conductor, pianist, educator; but it was as a great communicator – of music and through music – that every facet of his life and legacy is bound together. He was a Renaissance man, a multifaceted genius, but it was his career as a composer that meant the very most to him.

To celebrate the upcoming centennial of his birth on August 25, 2018 and his remarkable body of work as a composer, Deutsche Grammophon/UMe will release Bernstein: Complete Works, a massive 26 CD and 3 DVD deluxe, limited-edition box set collecting together for the first time all his published compositions. Curated with the full support of the Leonard Bernstein Estate, this landmark set – as complete a set as is currently possible to assemble – will be available May 11. The collection proudly celebrates the compositional heritage bequeathed the world by one of the 20th century’s most important musical figures, and includes the music he composed for orchestra and chamber ensembles, opera and musicals, ballet, film, his incidental music, vocal scores and piano music. The set is rounded out with a beautiful 140-page book with extensive documentation in English, French and German, numerous photographs from the Deutsche Grammophon archives, a forward by Craig Urquhart, Senior Consultant to the Leonard Bernstein Office, and a new essay on Bernstein’s composing life by Nigel Simeone, editor of The Bernstein Letters.

Considering how busy Bernstein was with all his other activities – conducting, educating, advocating for justice and human rights, and raising a family – it is astonishing what a substantial body of work he left behind. Though there is much material that remains unpublished – including songs, chamber music, juvenilia and even an entire musical – this collection substantially encompasses the scope of the works he published in his lifetime. The comprehensive collection contains Bernstein conducting Bernstein including Symphonies 1-3, Dybbuk: Suites 1 & 2, Facsimile, Fancy Free, A Quiet Place, Songfest and more; his earliest known works, an array of live recordings and the full recordings of his Broadway creations West Side Story, On the Town and Candide as well as his complete compositions for orchestra, concertos, and choral works.

To compliment the recordings from the vaults of DG, a number of new recordings were made expressly for this edition. Included are a recording of Mass by the Philadelphia Orchestra, conducted by Yannick Nezet-Seguin and featuring three choirs and a line-up of no less than nineteen vocalists (also available separately); American pianist Katie Mahan’ssurvey of Bernstein’s piano music from the early Sonata (1938) through to Thirteen Anniversaries (1988), as well as her collaboration with mezzo-soprano Angela Brower; chamber music for brass and wind ensembles by the Royal Philharmonic Orchestra; Variations on an Octatonic Scale with Lucie Horsch on recorder and Kian Soltani on cello; and more. Other artists on the collection include Michael Tilson Thomas, The Phillip Jones Brass Ensemble, Broadway star Linda Eder and Superstars of the operatic stage, Samuel Ramer, Thomas Hampson, June Anderson, Frederica von Stade, Jose Carreras, Marilyn Horne, and the legendary Billie Holliday who sings “Big Stuff” from Fancy Free.

Three captivating DVDs complete the 29-disc multimedia collection: “The Gift of Music,” an intimate portrait of Bernstein featuring archival footage from every aspect and phase of his extraordinary career – as conductor, composer, pianist, teacher and humanitarian; “Candide,” a filmed live recording of Bernstein conducting Candide, drawn from two London Barbican performances in December 1989; and “The Making Of West Side Story,” the acclaimed behind-the-scenes story of the recording of West Side Story, with all its triumphs and tribulations.

Bernstein: Complete Works follows the release of another monumental box set by Deutsche Grammophon/UMe, Bernstein: Complete Recordings on Deutsche Grammophon and Decca. Released March 9, the 158-disc set contains all of Bernstein’s recordings as a conductor for DG and Decca, together with his complete DG/Unitel DVD catalog. Comprising 121 CDs, 36 DVDs and a Blu-ray audio disc, it features such legendary recordings as Wagner’s Tristan und Isolde (1981), Bizet’s Carmen (1972), works by Stravinsky and Shostakovich and, of course, the complete symphonies of Beethoven and Mahler.

Universal Music Group is celebrating Bernstein’s remarkable legacy all year with an incredible array of recordings ranging from spectacular new releases to reissues reflecting some of the many high points of this multifaceted musician’s rich and varied career. The year began with the release of new deluxe hardcover editions of Candide and West Side Story and most recently saw the release of box sets for perhaps the most famous of Bernstein’s recordings, his Beethoven symphonies with the Vienna Philharmonic. They are now available as a 5 CD and Blu-ray audio disc box, on which they are presented for the first time in surround sound, and on vinyl as a 9 LP limited edition set.

Leonard Bernstein at 100 is a two-year global celebration of the life and career of the 20th century cultural giant, featuring more than 2,500 events on six continents. It kicked off at The John F. Kennedy Center for the Performing Arts on Friday, September 22, 2017 which officially launched the celebrations that will continue worldwide through the end of August 2019. Festive performances and events will take place across the globe (for complete listings, visit the calendar). Several exhibitions honoring Bernstein have recently opened. The Skirball Cultural Center in Los Angeles is presenting “Leonard Bernstein at 100,” organized by the GRAMMY Museum® and curated by its founding executive director and renowned music historian, Robert Santelli. Drawing from more than 150 photographs, personal items, papers, scores, correspondence, costumes, furniture, and films, Leonard Bernstein at 100, which just opened April 26 and will run to September 2, 2018, marks the official exhibit of the centennial and is the most comprehensive retrospective of Bernstein’s life and career ever staged in a museum setting. Following the LA exhibition, Leonard Bernstein at 100 will travel to cities across the U.S. Additionally, the National Museum of American Jewish History in Philadelphia is celebrating Bernstein with the immersive exhibition “Leonard Bernstein: The Power of Music,” now through September.

SLAVA! (1977)
A Political Overture for Orchestra

SILHOUETTE (GALILEE) (1951)
For Mezzo-Soprano and Piano

FANFARE FOR THE INAUGURATION OF JOHN F. KENNEDY (1961)
Orchestrated by Sid Ramin for Chamber Ensemble

FANFARE FOR THE 25TH ANNIVERSARY OF THE HIGH SCHOOL OF MUSIC AND ART,
NEW YORK CITY (1961)
For Brass and Percussion
Wind and Percussion Ensembles of the Royal Philharmonic Orchestra · BARRY WORDSWORTH

SHIVAREE – A FANFARE (1969)
For Double Brass Ensemble and Percussion

DVD1 – THE GIFT OF MUSIC – AN INTIMATE PORTRAIT OF LEONARD BERNSTEIN

DVD3 – THE MAKING OF WEST SIDE STORY
Recorded on location in New York, September 1984