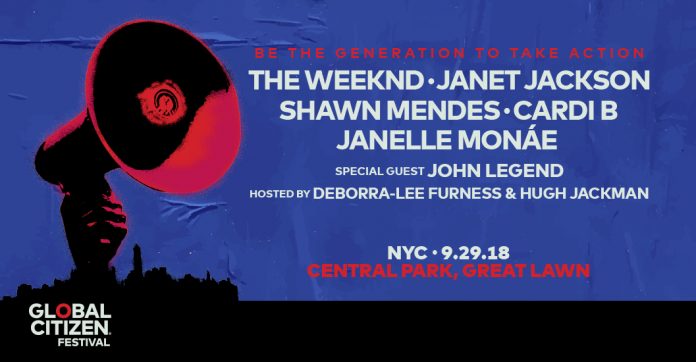 International advocacy organization Global Citizen today announced that headliners Janet Jackson, The Weeknd, Shawn Mendes, Cardi B, and Janelle Monáe will perform at the 2018 Global Citizen Festival, the free-ticketed event on the Great Lawn in Central Park, New York City on Saturday, September 29, 2018. For the fifth consecutive year, MSNBC & Comcast NBCUniversal will air a live simulcast of the Festival on MSNBC and for the seventh consecutive year, iHeartMedia has been named the exclusive audio media partner.

A special guest performance will be given by John Legend.

Hugh Jackman and Deborra-lee Furness return as lead hosts for the 5th year.

The 2018 festival will serve as a platform from which millions of Global Citizens around the world will demand that world leaders fulfill their obligation to achieve the UN Global Goals for Sustainable Development and end extreme poverty by 2030.

Building off momentum by activists and students from across the globe, Global Citizens and music fans will stand together to call on world leaders to uphold their responsibilities towards improving the quality of health care and nutrition that women receive during adolescence and childbirth, ensuring girls do not marry before they are ready, reducing, reusing and recycling plastic waste worldwide, ending the criminalization of poverty, providing quality education for all, and ensuring the United States fully funds its foreign aid budget.

Coinciding with the annual UN General Assembly meetings, this year’s Festival is a continuation of Global Citizen’s “Mandela 100” campaign; a series of global events honoring the life and legacy of Nelson Mandela in his centenary year.

Global Citizens can earn their admission to the free-ticketed Festival by joining the movement at glblctzn.me/nyc2018 by downloading the Global Citizen app. Ticket draws will occur throughout the summer and fans will be notified by Global Citizen when they have been selected.

Specific goals for the 2018 Global Citizen Festival campaigns include calling on Congress to resist the White House’s proposed cuts of 32% to American aid programs, which would devastate the fight against extreme poverty. They are also calling on the G7 countries to contribute to the $2 billion needed to tackle the world’s maternal health crisis that sees more than 5 million mothers and children die of preventable conditions every year. The organization also wants to End the criminalization of poverty, through eliminating and drastically reducing the use of cash bail in jurisdictions including New York State.

Since the first Global Citizen Festival in New York in 2012, Global Citizen has grown into one of the largest, most visible platforms for people around the world calling on world leaders to honor their responsibilities in achieving the United Nations Sustainable Development Goals and ending extreme poverty by 2030.