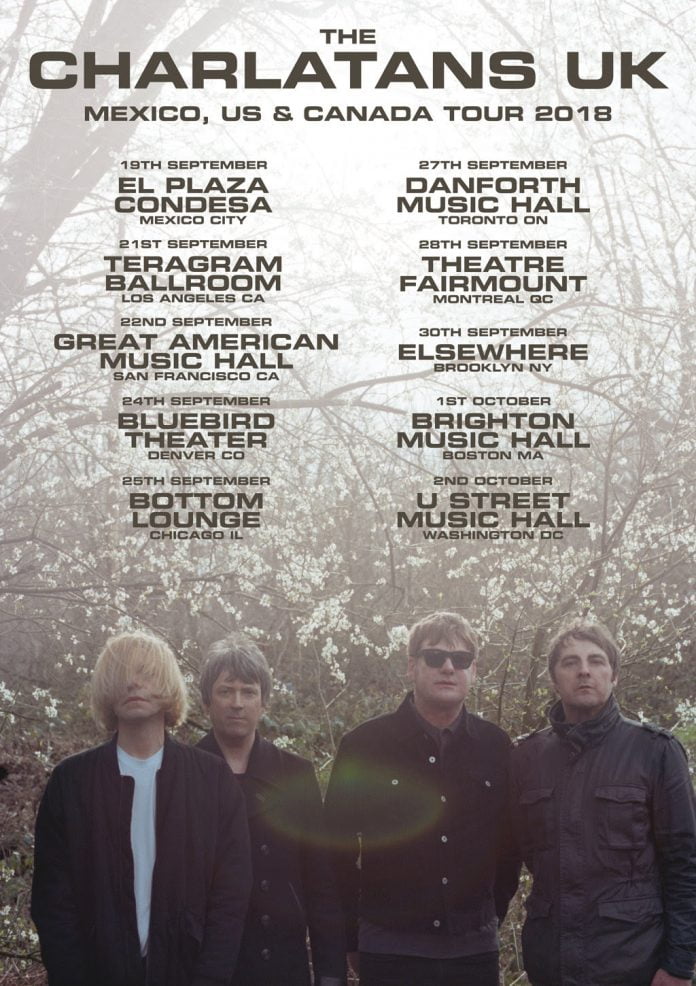 UK indie legends The Charlatans UK have revealed tour dates in Mexico, the United States and Canada set for the fall of this year. Full details below. The dates follow the release of their thirteenth studio album Different Days last year and include the band’s first Canadian shows in over a decade.

Different Days was co-produced with Jim Spencer at the band’s studio in Cheshire, England. The album features contributions from an array of friends, from Paul Weller and Johnny Marr, to crime writer Ian Rankin and writer/actress Sharon Horgan.

For the new album, the core quartet of vocalist Tim Burgess, bassist Martin Blunt, guitarist Mark Collins and keyboard player Tony Rogers, opened their doors to allow an enviable cast of friends to contribute to their latest work. The first call went to Pete Salisbury, the former Verve drummer, and Anton Newcombe from Brian Jonestown Massacre was sent an early version of ‘Not Forgotten’ and had sent back some thoughts within fifteen minutes.

The admiration for the band’s new ideas continued – Johnny Marr dropped by for an hour, but stayed for five, and features on three songs including the leading single ‘Plastic Machinery’. Similarly, Stephen Morris of New Order, who briefly helped out on Modern Nature, extended his role on this album to seven tracks of drumming and programming. Both Ian Rankin and Kurt Wagner offer spoken word contributions, and Catastrophe writer/actress Sharon Horgan sings backing vocals on ‘Different Days’. As the spirit of collaboration prospered, Burgess fast-tracked a long-discussed team-up with Paul Weller, for the expansive album finale ‘Spinning Out’.

Different Days follows on from the success of The Charlatans’ last album Modern Nature, which drew critical praise and gave them their eighth top 10 on the UK album chart, all capped off with a Lifetime Achievement award from Q Magazine. The Charlatans had a whirlwind 2015, completing two sold-out UK tours, popping up as the unannounced opening act at Glastonbury, and headlining Isle Of Wight Festival.