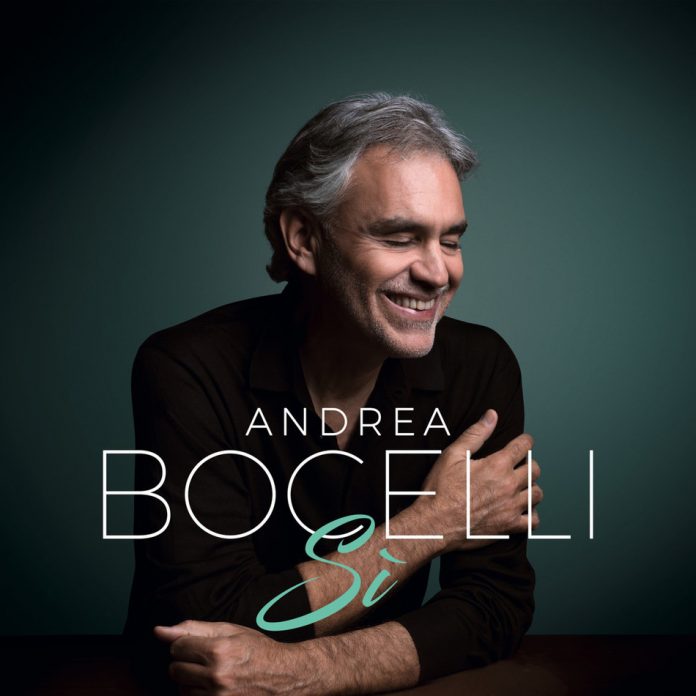 Andrea Bocelli has teamed up with some of the hottest musical stars on the planet for his forthcoming album ‘Si’ – reuniting with his friend Ed Sheeran after their chart-topping ‘Perfect Symphony’ on a brand new song called ‘Amo Soltanto Te’ (written by Ed with lyrics by Tiziano Ferro) and joining with pop sensation Dua Lipa on the single ‘If Only’. Crossover superstar Josh Groban and classical soprano Aida Garifullina also duet with Bocelli on the record, which is released on Sugar/Decca on 26th October. It is his first album of new material in 14 years – 16 brand new songs which celebrate love, family, faith and hope.

At the centre of the new record is a spine-tingling duet between father-and-son, as 20 year-old Matteo Bocelli steps into the limelight to duet with Andrea on ‘Fall On Me’ – a beautifully poignant song which reflects the bond between parent and child. It will appear in the end credits of the hotly-anticipated new Disney film, The Nutcracker and The Four Realms, starring Keira Knightley, Mackenzie Foy, Helen Mirren and Morgan Freeman, to be released on November 2nd. The single, which will be available in 7 different languages, will be released on Friday 21st September, along with a stunning new music video which reveals never-before-seen photos of Andrea and Matteo from their family photo album.

Andrea explains how his voice compares with Matteo’s: “Technically they are very different, but there is one thing that makes them most similar: the attitude. That characteristic way of expressing yourself through your voice. This makes Matteo and I very similar. But that is something that you cannot learn, that cannot be taught. That is something you are born with.”

Andrea Bocelli, who turns 60 this Saturday (22nd September), has brought together family and friends for his new album. It was recorded at his home in Italy and produced by the legendary Bob Ezrin (Pink Floyd, Lou Reed, Alice Cooper, Deep Purple, Thirty Seconds To Mars, etc) and includes a song produced by Mauro Malavasi and another one by Andrea’s oldest friend, Pierpaolo Guerrini. As well as a duet with Matteo, Andrea’s other son, Amos Bocelli, performs piano on the acoustic version of the track ‘Sono Qui’ (I Am Here) and Ali di Libertà. There is also a song called ‘Vivo’, which is an emotional homage to his wife Veronica. ‘If Only’ (his duet with Dua Lipa) was co-written by Francesco Sartori and the late Lucio Quarantotto – who helped pen one of Bocelli’s biggest hits, ‘Con Te Partirò’ (Time To Say Goodbye), which was released over 20 years ago and has become of the classical best-selling singles of all time.

Andrea Bocelli says of the album: “I wanted to go back to my memories of being a young man, playing at a piano bar. Obviously since then, I’ve produced lots of albums, sung lots of covers, performed many other things. But at a certain point I said to myself: ‘Maybe the time has come to put my effort into finding new songs.’ Like starting all over again, as it were, in my career.”

Bocelli’s humble manner belies his international status as one of the world’s biggest classical stars – he’s sung for Popes, Presidents and royalty, performed in all the greatest concert halls and opera houses around the world, and sold 85 million records. He has performed at major international events including the Olympic Games and the World Cup, as well as his own sell-out arena shows. He has a Golden Globe, 7 Classical BRITs and 7 World Music Awards under his belt, plus a star on the Hollywood Walk of Fame.

Drawing millions in with his popular crossover appeal, Bocelli has collaborated with a host of A-list pop stars including Céline Dion, Tony Bennett, Ed Sheeran, Ariana Grande, Jennifer Lopez, Nicole Scherzinger, and many more. He also wowed UK football fans with a performance for Claudio Ranieri’s Premier League-winning Leicester City at the King Power Stadium in 2016. Bocelli continues to tour the world with major shows in the US, Germany, Italy, Spain, Brazil, Canada, Ireland and the UK where fans will have the opportunity to hear his new music. More information on his tour dates here.

Sì is an album about heart and soul, positivity and family, melody and magic. And for that reason, Bocelli chose the strong, simple title. “In this historical period we are going through right now, we too often say no. But yes is the word you say when you have your first kiss, when you agree with somebody, when want to make someone feel good. Sì is the word you say every time things will end well. For a thousand and one reasons, sì is the expression of a positive, powerful, human word and feeling and emotion.”

And so, in his 60th birthday year, Andrea Bocelli is proud to return to where it all began. His uplifting new album Sì gives us a window into the world of this extraordinary singer and global icon.