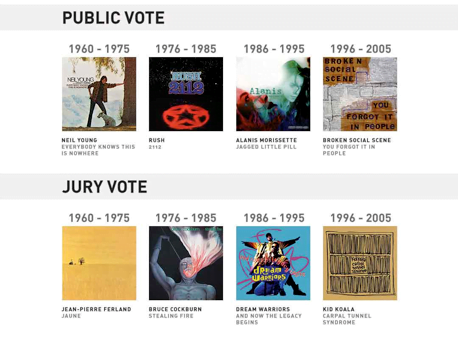 The winners were chosen from four short lists, each representing a different musical era, and were curated by a Heritage Prize jury of music historians and music media. Two winners for each era were chosen — one by public vote and one by the jury. Voting opened at the Polaris Music Prize Gala on September 17, 2018 and ended on October 18.

The winners of the 2018 Slaight Family Polaris Heritage Prize, supported Re:Sound, are:

These will be the second albums from Neil Young and Rush to receive Heritage Prize designation. All other acts are receiving their first such recognition.
“Congratulations to all the winning artists. You’ve created important memorable recordings that have had a lasting impact on the musical landscape. I have tremendous appreciation for the work that has gone into creating these timeless albums,” said Gary Slaight, President and CEO of Slaight Communications.

“Re:Sound is honoured to be part of the Polaris Heritage Prize for a second straight year,” said Ian MacKay, Re:Sound’s president. “Each of these albums speaks to the strong and long lasting effect of music. Spanning over four distinct eras and across all genres, the Heritage Prize is a testament to Canada’s best and reminds us why we passionately do the work we do to help ensure a thriving and sustainable music industry in Canada. Congratulations to all of this year’s winners!”

“Our Heritage Prize jurors listened to dozens of classic Canadian albums and tried to imagine which ones would have made it onto a short list in the four pre-Polaris eras,” said Mary Dickie, the Heritage Prize jury foreperson. “They weighed innovation, musicianship, lasting influence and general brilliance and came up with this list of outstanding albums that reflect the remarkable diversity and genius of Canadian musicians. Thanks to all the winners for your timeless work.”

The Office of Gilbert Li, who curated the 2018 Polaris Music Prize posters and the posters for the 2017 Heritage Prize, will return to curate eight new artists to pay tribute to the winning records.

Four upcoming episodes of the Polaris Podcast will be dedicated to exploring the significance of these eight Heritage Prize albums.

The records that did not get selected as winners will remain on the short lists for the 2019 Heritage Prize. The Heritage jury will add two additional records for each era.

Records are selected for the Heritage Prize in accordance with existing Polaris criteria; to honour and reward artists who produce Canadian music albums of distinction without regard to musical genre or commercial popularity.