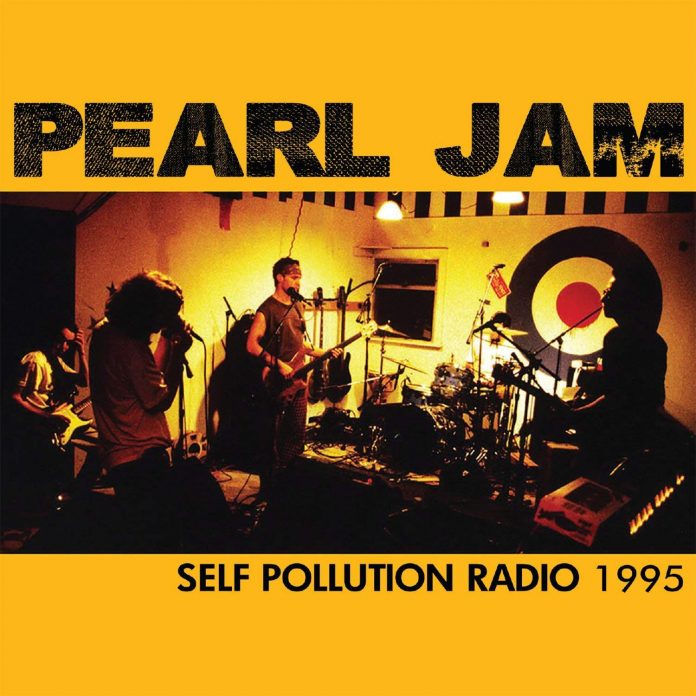 Hey… am I on? were the uncertain first words delivered by Pearl Jam singer-come-DJ Eddie Vedder at the start of the band’s 1995 frolic on the airwaves, Self-Pollution Radio. The four-and-a-half hour show, broadcast on January 8, ’95, was a Seattle scenester’s delight, featuring live sets from Pearl Jam, Soundgarden, Mudhoney, The Fastbacks, and Mad Season (a satellite project for Pearl Jam’s Mike McCready and Alice In Chain’s Layne Staley, previously known as The Gacy Bunch), a spoken word piece from Nirvana’s Krist Novoselic, tracks from ex-Nirvana drummer Dave Grohl’s ‘upcoming solo album’ (at least that was how it was credited at the time), impromptu interviews and much more. Records played came from Sonic Youth, Daniel Johnston, American Music Club, The Who, The Gits, Babes in Toyland, Louis Armstrong and numerous others. The Pearl Jam set played that legendary evening, now presented in full on this CD, was stunning. With the vast majority (7 cuts no less) coming from the group’s then recently released Vitalogy album, with the other 3 numbers performed coming from PJ albums 1 (Ten) and 2 (Vs). The session also featured new drummer Jack Irons, original sticks-man with Red Hot Chili Peppers, playing live with the group for the first time – having recently replaced the dismissed Dave Abbruzzese. The venue for the live music (the DJ part was pre-recorded) was a house in Seattle owned by Vedder which was used for rehearsals by both Pearl; Jam and by other bands and musicians. The ‘live room’ apparently was the front bedroom! This recording remains an important historical document in the Pearl Jam story, but remains too a hugely enjoyable listening experience with this astonishing group playing as though their very lives depended on it.