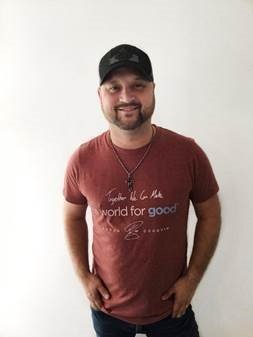 Canadian country artist Aaron Goodvin has launched a campaign to raise money and awareness for six charities in partnership with A World For Good – a new online platform that lets artists engage and involve fans in their giving decisions. The Warner Music Canada and Reviver Records artist has selected charities related to causes that have impacted his life, and is asking his fans to vote for their favorite of the six non-profit organizations.

A World For Good is a platform that allows fans’ to determine how funds get distributed.  When voting, a fan can also purchase an exclusive t-shirt saying Together we can make a world for good and featuring Aaron’s signature, with a portion of the proceeds going to the specific charity they have voted for. Fan votes determine the percentage of funds and time that Aaron will be giving to each charity in the coming year.

The six charities are: St. Jude Children’s Research Hospital, World Vision, MS Society of Canada, Ronald McDonald House Charities, Children’s Wish Foundation of Canada, and Stollery Children’s Hospital Foundation. Aaron’s participation is the first time a music artist has participated in an A World For Good campaign. Aaron reflected on his involvement saying, “So many exciting things have been happening for me in my career. Because of that I have been looking for ways to help those who are facing challenges right now. A World For Good is a great way to do that and involve my fans who make it all happen for me. I hope that other artists will follow our lead.” Aaron’s A World For Good campaign can be seen at www.aworldforgood.com/a/aarongoodvin

Alberta native Aaron Goodvin has had an exciting year in Canada with four Top 10 singles, an extensive touring schedule, and a recent CCMA win for Songwriter of the Year for his platinum selling single “Lonely Drum,” the only platinum selling country single in Canada released in 2017 or 2018. Aaron’s sophomore album is scheduled for release in Canada on Warner Music Canada, and in the US and worldwide on Reviver Records in February and features his current Canadian single and fourth consecutive Top 10 hit “You Are.”

A World For Good is an online audience engagement and empowerment platform that lets celebrities support the causes their fans care about. This strengthens relationships between celebrities and their fans, and increases revenue opportunities and charitable activity. More information about A World For Good can be found here: https://www.aworldforgood.com