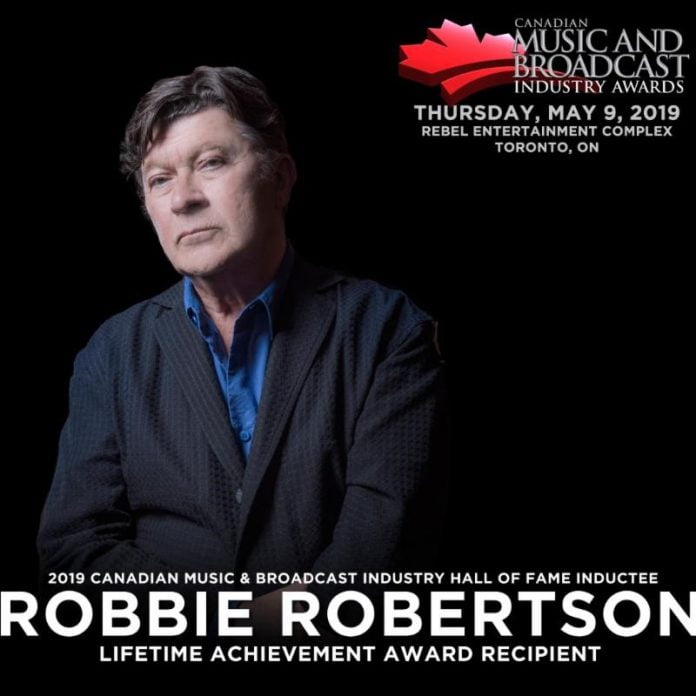 Canadian Music Week is thrilled to announce Robbie Robertson as the recipient of the Lifetime Achievement Award in the Canadian Music Industry Hall of Fame. Robbie will be honoured for his exceptional contributions to the music industry at the annual Canadian Music and Broadcast Industry Awards Gala Dinner at Rebel Entertainment Complex in Toronto on Thursday, May 9, 2019.

Robbie Robertson was born in Toronto, Ontario with roots in both the Mohawk community at the Six Nations Reserve and the Jewish enclave of the city’s downtown. A guitar player from age of 10, he received his rock ‘n’ roll education as a member of the Hawks, the backing band for rockabilly star Ronnie Hawkins. The Hawks went on to play with Bob Dylan on his legendary ”Going Electric” tours in 1965 and 1966. Moving to Woodstock in 1967, Robertson and his bandmates recorded the seminal “basement tapes” with Dylan before changing their name to The Band and cutting the groundbreaking Music from Big Pink in 1968.

Over the course of seven studio albums, Robertson penned such classics as The Weight, The Night They Drove Old Dixie Down, Up On Cripple Creek, Acadian Driftwood, and It Makes No Difference. The Band’s farewell concert at San Francisco’s Winterland on Thanksgiving 1976 was filmed by Martin Scorsese and released as The Last Waltz. Robertson has created music for many of Scorsese’s films, from Raging Bull and The Color of Money to The Departed and The Wolf of Wall Street, and has recently scored Scorsese’s The Irishman coming soon.

Robbie Robertson has released five acclaimed solo albums, with his sixth to be released later this year. In 2016 he penned the New York Times bestselling Memoir “Testimony”, which is being made into a documentary film to be broadcast by Bell Media in Canada.

Robertson has received the Grammy’s Lifetime Achievement Award, as well as lifetime awards from the National Academy of Songwriters and the Native American Music Awards. In Canada he has won several Juno awards, been honoured twice by Canada’s Walk of Fame, been inducted into the Canadian Songwriters’ Hall of Fame, made an Officer of the Order of Canada, and received the Governor General’s Performing Arts Award. Alongside the Band, Robertson was also inducted into the Rock and Roll Hall of Fame.