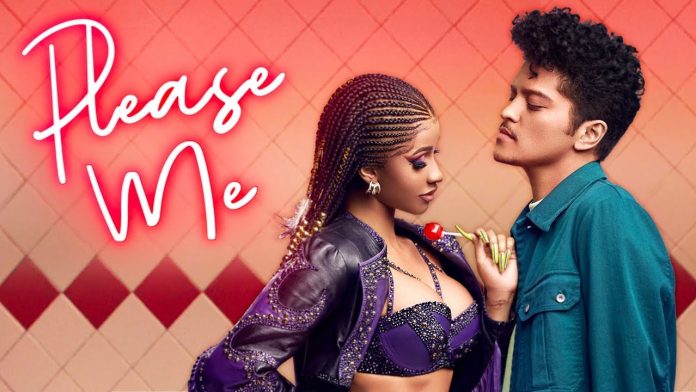 Cardi B has released her new video for her latest single, “Please Me” with Bruno Mars. The Bruno Mars and Florent Dechard directed “Please Me” video is streaming now on Cardi B’s official YouTube channel and is available at all DSPs and streaming services. Additionally, “Please Me” debuted at #5 on the Billboard Hot 100 this week.

“Please Me,” produced by Bruno Mars and The Stereotypes arrives mere days after Cardi B received the “Best Rap Album” GRAMMY for her chart-topping, RIAA 2x platinum certified “INVASION OF PRIVACY,” making history as the first solo female artist to win that prestigious category. “Please Me” marks the second collaboration between the GRAMMY winning artists. The first of course being the 3x platinum certified smash hit “Finesse (Remix),” the video for which has amassed over 551 million views since it’s January 2018 release.

Currently starring on the cover of Harper’s BAZAAR‘s Spring Fashion Issue after recently being named one of Entertainment Weekly‘s “Entertainers of the Year,” Cardi has fast become one of the most high profile stars of the current era. She is currently featured alongside Steve Carrell and Lil Jon in Pepsi’s acclaimed “More Than OK” Super Bowl commercial (streaming HERE).

An array of high profile TV appearances followed last year’s arrival of “INVASION OF PRIVACY,” including a hilarious installment of Carpool Karaoke on CBS’ The Late Late Show with James Corden and an in-depth special interview on CBS Sunday Morning. Other recent appearances include sitting down on ABC’s Jimmy Kimmel Live! during their popular Brooklyn Week, a stellar performance on NBC’s Saturday Night Live, and an historic installment of NBC’s The Tonight Show Starring Jimmy Fallon, where she served as both musical guest and the first-ever co-host in show history. What’s more, Cardi tore the house down at the 2018 BET Hip Hop Awards, performing “Get Up 10” and “Backin’ It Up” with Pardison Fontaine having only just lit up the 2018 American Music Awards with a spectacular rendition of “I Like It” joined by Bad Bunny and J Balvin.

Along with her “Best Rap Album” triumph, Cardi received a number of other nominations from the 61st Annual GRAMMY AWARDS, including “Record of the Year” (for “I Like It”), “Album of the Year” (for “INVASION OF PRIVACY”), and “Best Rap Performance” (for “Be Careful”). Cardi received an additional nod in the “Best Pop Duo/Group Performance” category, honoring her role on Maroon 5’s “Girls Like You (Feat. Cardi B).” Additionally, Cardi received three 2018 AMA wins including “Favorite Artist – Rap/Hip-Hop,” “Favorite Song – Soul/R&B” (for “Finesse” with Bruno Mars), and “Favorite Song – Rap/Hip-Hop” (for “Bodak Yellow”). Cardi is among the most honored artists of the year having recently received a stunning 14 nominations for the upcoming iHeartRadio Music Awards, set to take place March 14th in Los Angeles. For her full list of nominations and for social voting, fans can visit iHeartRadio.com/awards.

The award winning “INVASION OF PRIVACY“ has seen all 13 tracks go on to become RIAA Gold certified or higher. The album is of course highlighted by a truly remarkable string of chart-busting singles, including two #1 classics in the 7x RIAA platinum certified “Bodak Yellow” and the 5x platinum certified smash, “I Like It,” featuring Bad Bunny and J Balvin, as well the 2x platinum certified “Bartier Cardi,” and platinum certified “Be Careful,” “Ring (Feat. Kehlani),” and “Drip (Feat. Migos).” Furthermore, all of the LP’s remaining tracks have proved gold certified favorites, among them “Get Up 10,” “Bickenhead,” “Best Life (Feat. Chance the Rapper),” “She Bad,” “Thru Your Phone,” and “I Do (Feat. SZA).”