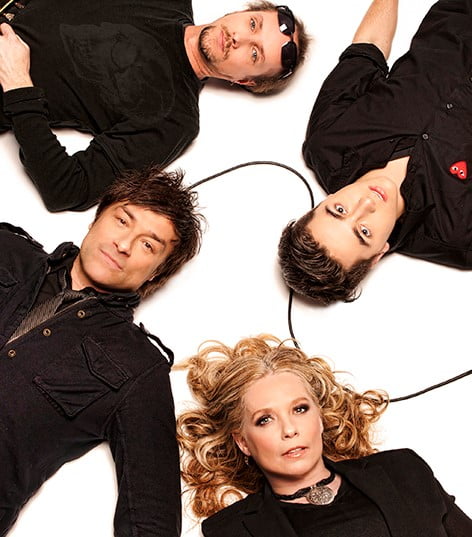 Mark it on your calendars: it’s a New Day New World for iconic Canadian band Spoons and their newest release — available now!

Formed in 1980, Gordon Deppe and Sandy Horne made Spoons a different kind of household word…

They would help define the sound of pop and new wave in the 80s with hits including “Nova Heart”, “Romantic Traffic”, “Old Emotions” and “Tell No Lies.” Their album Arias & Symphonies would go on to be named one of the 20 Most Influential Albums of The 80s by The Chart Magazine, and their song “Nova Heart” was recently included in Bob Mersereau’s book The Top 100 Canadian Singles.

Not bad for a bunch of kids from Burlington, Ontario.

And now, evoking all the fun of their most notorious ear-gems of hits, their newest 12-track missive lands the band firmly in 2019.

Starting off strong with the signature Spoons sound fans new and never-waning come for, the opening song “All The Wrong Things (In The Right Places)” is set and ready for instant anthem status. Trivia buffs will want to know: its final mix was a collaborative campaign after an online contest had listeners nation-wide submit chants to be mixed into the song’s chorus.

And “Beautiful Trap” — a song about all the things we can’t resist, no matter how hard we try — brings back the ‘doot-doots’ of 1984’s hit “Romantic Traffic.”

The band says it wasn’t intentional…. “Like the lyrics of the song insist, it was unavoidable,” they say. “It’s in our DNA!”

Formed in 1980, Gordon Deppe and Sandy Horne soon made Spoons a different kind of household word. They would help define the sound of pop and new wave in the 80s with hits including Nova Heart, Romantic Traffic, Old Emotions and Tell No Lies. Their album Arias & Symphonies would go on to be named one of the 20 Most Influential Albums of The 80s by The Chart Magazine and their song Nova Heart was recently included in Bob Mersereau’s book The Top 100 Canadian Singles. Not bad for a bunch of kids from Burlington, Ontario.

Their first album Stick Figure Neighbourhood was recorded in 1981 at Grant Avenue Studios in Hamilton, Ontario with an up and coming engineer named Daniel Lanois. The album garnered rave press reviews and reached #1 on college radio. But it wouldn’t be until the release of their song Nova Heart, produced by John Punter of Roxy Music and Bryan Ferry fame, that the Spoons became a household name. The Arias & Symphonies album, recorded at George Martin’s Air Studios in London, England, solidified the Spoons’ presence on the new wave music front. With the commercial radio success that followed the band saw themselves opening for such acts as The Police, Culture Club and Simple Minds. A little TV show called MuchMusic had also just been launched and the young Spoons were tailor-made for a whole new video-driven generation. In fact, the very first episode of the show began with, “Welcome to MuchMusic. Coming up we have brand new videos by Duran Duran, Howard Jones and the Spoons.” A new era was launched with those words.

In 1983, Ready Records brought on Nile Rodgers (Chic, David Bowie, Madonna, and most recently Daft Punk’s “Get Lucky”) to produce their follow-up album Talkback. More radio hits emerged, including Romantic Traffic, Old Emotions and Tell No Lies. The Spoons continued to build their fan base around the world. The video for Romantic Traffic, shot in the subways of Toronto, remains as one of the most iconic Canadian videos of all time.

A soundtrack for Ron Mann’s movie Listen To The City and two more studio albums followed. Under the wing of Rush’s manager Ray Danniels, the Spoons recorded the Bridges Over Borders and Vertigo Tango albums on Anthem Records. The resulting singles Bridges Over Borders, Be Alone Tonight, Rodeo, When Time Turns Around and Waterline kept the band making videos and touring until the end of the 80s. But the decade was winding down as a new wave of music called Grunge was taking the world by storm. A lot of people believed that this would mark the end for all things 80s. They couldn’t have been more wrong. Something that would soon be known as Retro 80s was looming just around the corner.

The greatest hits package Collectible Spoons was released in 1994 on MCA/Universal Music and led to one of the band’s most successful tours ever. The old fans were hungry for the music they grew up on and new ones were eager to give the 80s a second listen. Spoons songs were being played more frequently as many radio stations featured all-80s shows. A new offshoot of MuchMusic called MuchMoreMusic revived all the old 80s videos. The unthinkable was happening. The 80s were back.

When the retro phenomenon showed no signs of stopping, a new album seemed like the next logical step. In 2010, Gordon and Sandy released Static In Transmission, produced by Jeff Carter; their first collection of new songs in over two decades. Although still undeniably Spoons, the single You Light Up proved that the band remained inexplicably current. In fact, John Sakamoto of the Toronto Star included it in his prestigious Anti-Hit List the week of its release, usually reserved for up and coming new artists. Not bad for a band that’d been around for thirty years.

In 2012 Sparks Music and Ready Records celebrated the 30th anniversary of one of the band’s most successful releases with a special Nova Heart Anniversary EP. The package contains the quintessential 1982 album cut and dance club extended mix, as well as the electronica/dub step Singularity remix, which has become the high point of their live shows and new favourite for fans new and old alike. A special 30th Anniversary edition of the Arias & Symphonies album followed, released by Sparks/Ready Records/Universal Music, complete with extensive liner notes, historical photos and live tracks. It also saw the reunion, for the first after twenty-six years, of the original band line-up for an incredible sold-out release party in Toronto.

In 2013 the Spoons won the Music Express Magazine “Back In The Spotlight” Award. A remastered version of their debut album Stick Figure Neighbourhood was released on vinyl, followed in 2014 by the 30th Anniversary CD commemorating their smash hits Romantic Traffic and Tell No Lies. The anniversary show, complete with the original line-up of Rob Preuss, Derrick Ross, Sandy and Gord was filmed for a concert DVD/documentary available this March, 2015. Gord Deppe’s autobiography SpoonFed, released through Manor House Publishing, is available through Chapters and Indigo stores and quickly became a #1 Best Seller in its genre on Amazon.

The Retro 80s movement shows no signs of slowing down. Not one bit. The band is currently recording new material, working on more remixes of their classic hits and will be touring Canada this summer. And as far as Sandy and Gord and a lot of fans are concerned, that is a very good thing indeed.