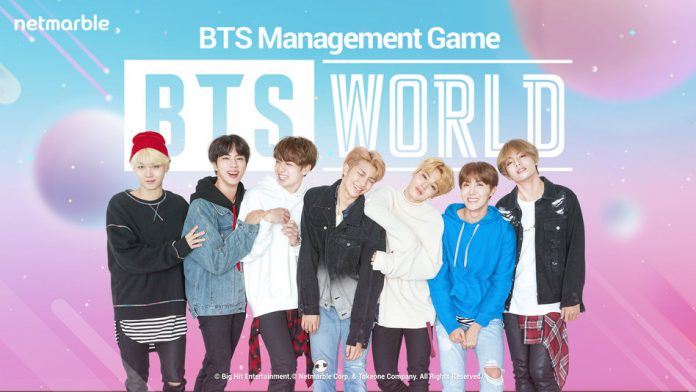 Created in conjunction with the global superstars, BTS WORLD is a story-based mobile simulation game that takes players on an interactive journey. The story of BTS WORLD takes players back to the start before the band’s debut to pursue the role of BTS’ manager, with the ultimate goal of fostering BTS to become superstars.

Players will encounter various missions where they will select certain BTS member cards to clear the mission and progress through the game. Collecting and upgrading these cards will open up even more stories along the way, and players will be able to interact virtually with BTS in the game through a 1:1 interactive system.

Pre-registration for the game is currently open at https://btsw.netmarble.com. A new, playable ‘mini game’ demo of BTS WORLD will be available on the site, giving players a preview ahead of launch. The pre-registration site also currently features a game introduction, a BTS story, and “From BTS” – a special sneak peek of the game’s “mobile function” that lets players interact virtually with group members, as well as a mini-game that pairs players with the BTS member they match with best as a manager.

BTS WORLD will also reveal all-new, original soundtrack from BTS leading up to the launch, starting with a sub-unit song by Jin, Jimin, and Jung Kook of BTS.

The game will be released worldwide (excluding China) for iOS and Android devices. For more information on BTS WORLD, please visit https://btsw.netmarble.com. The latest updates are also available by following BTS WORLD on Twitter and Instagram.