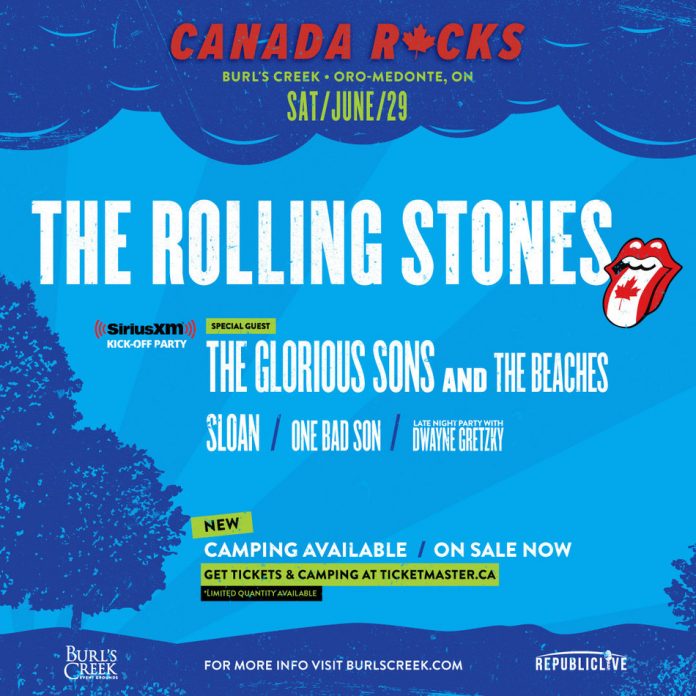 The Rolling Stones just announced the final lineup for “Canada Rocks” on June 29, 2019. In celebration of Canada Day Weekend, the legendary group will be joined by an all Canadian line-up at the SiriusXM Kickoff Party with special guest The Glorious Sons, The Beaches, and newly added artists Sloan, One Bad Son, and a late night party with Dwayne Gretzky.

Canada Rocks is the only Canadian stop on the Rolling Stones “No Filter” tour.

In addition to the expanded lineup, Republic Live is also pleased to announce camping at Burl’s Creek.

Festival goers can start their Canada Day weekend celebrations on Saturday at 2PM with SiriusXM, proud supporters of Canadian artists, at the SiriusXM Kickoff Party which includes Canadian bands performing on two stages. Following the Rolling Stones headlining performance, campers and festival attendees that don’t want to pack it in can end the night at the Late Night Party with Dwayne Gretzky.

Ticket holders, campers and non-campers alike, looking for alternative ways to get to the venue, can find transportation information, including public transit and shuttle bus details at burlscreek.com.

“At Republic Live, we aim to create lifetime experiences. That’s why it’s so exciting to bring the Rolling Stones to Canadaand add on-site camping to enrich the experience,” said Eva Dunford co-founder of Republic Live. “The greatest rock ‘n’ roll band in the world, Canada Day weekend and camping at Burl’s Creek Event Grounds… you just can’t get more satisfaction than that! Thanks to the diligent work and dedication of our amazing team, the loyal fans will have an unforgettable Canada Day party.”

Tickets and camping passes are on sale now at ticketmaster.ca.