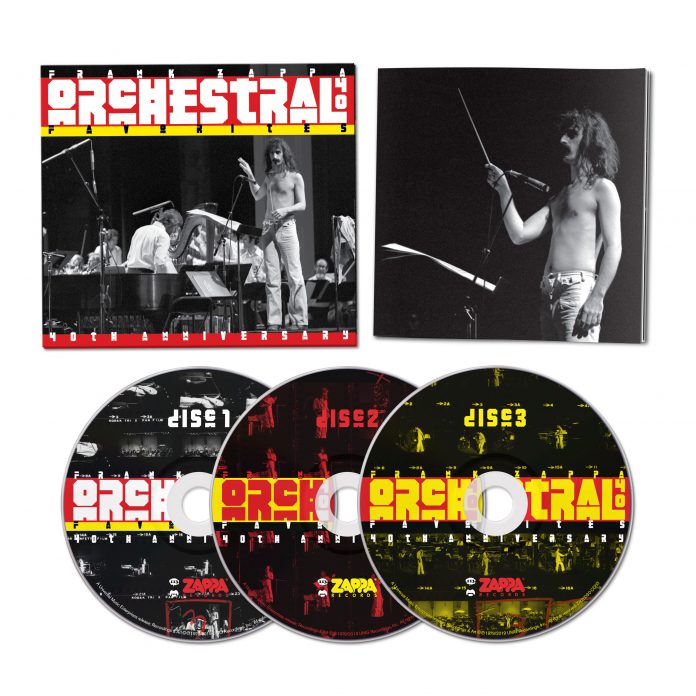 When Frank Zappa’s Orchestral Favorites was eventually released in 1979 as part of fulfilling his contract with his contentious former label, the album was dumped into the world along with several other titles without the legendary musician’s permission or quality control. It did not include liner notes or credits and the artwork and audio wasn’t approved by Zappa who publicly criticized it as not being up to his standards. As a result of not receiving any promotion, it was quickly relegated to the bargain bin shortly after its release.

Four decades later, in celebration of the long-beleaguered album’s 40th anniversary, the Zappa Family Trust is righting this wrong and presenting Orchestral Favorites with the audiophile detail and respect it deserves to commemorate the historical event that took place at UCLA’s Royce Hall in September 1975 where the compositions were recorded. On August 30th, Zappa Records/UMe will release a 40th anniversary 3CD deluxe edition featuring brand new proper hi-fi transfers of the original tapes, a newly created cover, and extensive liner notes from Zappa Vaultmeister Joe Travers and former Zappa bandmate Terry Bozzio who recounts performing at the concerts and provides some unique illustrations for the collection. The beautiful packaging includes proper musician credits for the first time and a wealth of stunning rare and never-before-seen photos of the event from the estate’s archives.

Produced by Ahmet Zappa and Joe Travers, the comprehensive collection will include the original album plus the entire evening performance from September 18, 1975 spread across two additional discs. After extensive searches in the Vault, the elusive master tone reel, the essential component that contains the alignment tones that help set up the playback of the master tapes that Zappa reportedly did not provide when he turned in the album, was found, allowing the Zappa Family Trust to present the audio as originally intended. Coupled with new hi-res transfers from the original tapes and mastering by Bob Ludwig, the music sounds the best it ever has. The bonus concert features brand new 2019 mixes by Craig Parker Adams from the original 2″ 24-track masters. The digital deluxe, which mirrors the 3CD version, includes an instant grat download of a first-time available version of “Revised Music For Low-Budget Symphony Orchestra.”

Orchestral Favorites will also be released on vinyl featuring the original album mastered by Bernie Grundman and the newly generated anniversary art and cover. It will be pressed at Furnace MFG on 180-gram audiophile grade black vinyl.

In September 1975, in between trying out new band members and preparing for tour, Zappa scheduled an event at UCLA’s Royce Hall. Using his own budget with funds from the surprise hit single “Don’t Eat The Yellow Snow,” he hired a roughly 37-piece orchestra with the intention to hear his orchestral music played. As Travers details in the liner notes, “Frank supervised everything, hired sound and lights, mixed the front of house sound at times, conducted the orchestra on occasion, and played guitar with them. The program repertoire consisted of complex and challenging music that originates from all time frames of FZ’s career. Older themes that predate the original Mothers Of Invention, to brand new pieces hot off the pen, mixed in with some good ol’ FZ directed improvisation.”

The Abnuceals Emuukha Electric Symphony Orchestra was conducted by Michael Zearott and made up of various live and studio musicians, most of which who had previously worked with Zappa on one of his many projects. They were assembled with the help of Mike Altschul and Earle Dumler who played on The Grand Wazoo and Waka/Jawakaalbums. Other familiar names included: Bruce Fowler, Dave Parlato, Ian Underwood, Malcom McNab and Terry Bozzio. Zappa and the orchestra rehearsed for several days, had an afternoon recording session and performed two shows in two nights.

The original album was derived from recording sessions in the afternoon without an audience which was then meticulously edited together by Zappa using a razorblade. Highlights from the record include “Strictly Genteel,” part of the finale piece from 200 Motels, the new composition “Pedro’s Dowry,” a song Zappa wrote instead of going on vacation and famously exclaimed upon completion, “that’s the best vacation I ever went on,” and the first appearance of the megacomposition “Bogus Pomp.” The bonus content on the deluxe edition is filled with nearly two hours of previously unreleased material and contains the entire evening performance from September 18, 1975 complete with Zappa’s song introductions and stories. Some of the many standouts include an off-the-cuff version of the classic “Black Napkins,” an on-the-fly attempt of “The Adventures of Greggery Peccary,” and the kind of exciting improvisations that became one of Zappa’s trademarks.

Zappa re-worked Orchestral Favorites for CD in 1991 and it has subsequently been reissued several times after his death but with the new master finally matched to the project tone reel, this is the first time the album has ever been presented how the late, great artist intended. Sounding better than it ever has, fans can enjoy this special and historical event in Zappa history in a new way, with the Royce Hall performances sounding as fresh as they did 44 years ago.

The Zappa Family Trust and UMe are also excited to announce they will reissue Zappa’s classic compilation album Mothermania on vinyl to commemorate its 50th anniversary. The album was made by Zappa in 1969 as a response to the many compilations that were being put out with the same material. He decided to release his own version and used exclusive edits and mixes of Mothers of Invention tracks from the albums Freak Out!, Absolutely Free and We’re Only in It for the Money. The record includes different mixes of “The Idiot Bastard Son” and “Mother People.” The vinyl, which has been out-of-print since 1972, has been mastered from the original analog tapes by Bernie Grundman and is being pressed on 180-gram black vinyl by Furnace MFG.