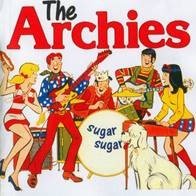 Let’s talk about 1969 – 50 years ago – for a moment – The Beatles’ last public performance, on the roof of Apple Records, First Concorde test flight is conducted In France, Boeing 747 jumbo jet makes its debut, Pontiac Firebird Trans Am the epitome of the American muscle car is introduced, Woodstock attracts more than 500,00 and a singer-songwriter named Andy Kim co-writes The Archies’ “Sugar, Sugar,” a song that debuts on the Billboard Hot 100 in July, 1969, a full 2 months after released as radio doesn’t want to play a cartoon band.

In September, it hits #1 on the way to becoming Billboard’s Record of the Year and the biggest-selling single of the year. Wilson Pickett, Tom Jones, Ike & Tina Turner, Bob Marley, The Germs, Mary Lou Lord, and even Homer Simpson goes on to cover the song.

Born in Montreal, Andy Kim was inspired by the Beatles, Hank Williams, Frank Sinatra, Elvis, Buddy Holly, and Bob Dylan. He found fame in New York City at just 16 years old when he wrote How’d We Ever Get This Way?, the first of nine Billboard Top 40 hits, including #1 songs Rock Me Gently and Sugar, Sugar, one of Billboard’s “Greatest Songs of All Time.” A true Canadian son, Andy has been awarded the country’s top industry honosr three times, the JUNO Award for outstanding achievements in the record industry, as well as the Indie Award for Favorite Solo Artist and a star on Canada’s Walk Of Fame. Andy is a member of Songwriters Hall of Fame and was inducted into Billboard’s Hit Parade Hall of Fame. Over his epic career, Andy has sold over 30 million records, and The Archies’ “Sugar, Sugar, has been streamed over 300 million times on Spotify and YouTube.

His latest album, It’s Decided, produced by Broken Social Scene’s Kevin Drew, was released on Arts & Crafts to critical acclaim. In May, 2016, Andy was inducted into the Canadian Music Industry Hall Of Fame. Andy Kim’s music can be heard almost 50 years later in hit series such as Showcase’s Ray Donovan, The CW’s Riverdale and Netflix’s Mindhunters and Sarah Jessica Parker’s new series Divorce.

One Man Band Performs “Pump Up the Jam”